As the NPL hadn’t opened its doors to the public in over two decades it was definitely an occasion that we didn’t want to miss.

In the entrance hall there was a buzz of excitement from visitors young and old as they tried out the first of the interactive experiments – we were barely through the front door and we had already had our height measured by a laser height interferometer, capable of measuring length down to sub-nanometre accuracy!

The various modules were mapped out clearly and our route took through them took us on a voyage of discovery. Amongst the wondrous sights and sounds were real-time spectrograms to visualising sound, the National Standard Kilogram, Nanoanalysis (including next generation of electronic displays), airborne Nanoparticle Measurement, optical atomic clocks, 3D Optical Technology for image viewing, lasers that define the UK primary standard metre and Biometrics Identification. Guests clapped and shouted to create their own audio experiments to show the difference between the infamous reverberation and hemi-anechoic chambers. 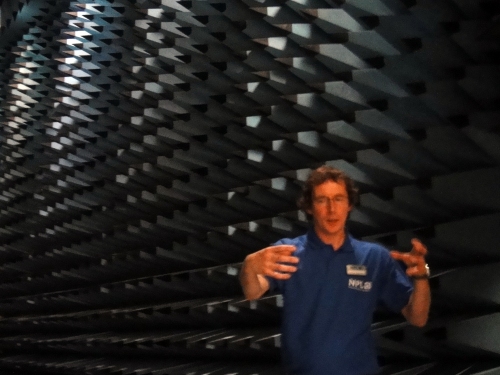 In each lab were knowledgeable, passionate and very friendly scientists to explain their particular area of expertise – all doing their bit to explain the science and real world applications of the complex work that is undertaken at the labs.

Proudly on display in the engineering workshop was the NPL designed water-powered car that won The Gadget Show challenge hosted here – perhaps a precursor to the Bloodhound SSC project that will attempt to break the land speed record in 2011 using a supersonic car that NPL helped design!

Other labs were closed to the public but the names on their doors hinted at the unusual and delightful work undertaken behind them – our personal favourites were “Creep of Metals”, “Cryogenic Systems”, “Roundness and Profile”, “High Dew-Point Laboratory” and “Hardness Testing”. 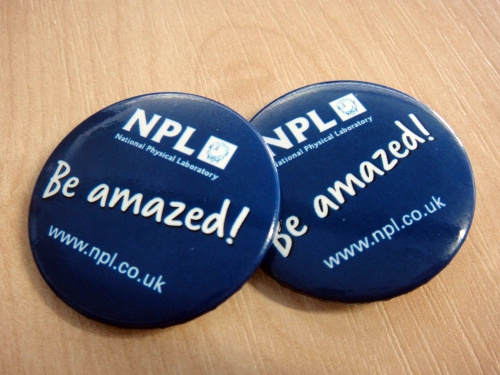 Also on display was the history of the laboratories – dating back to 1900 where its humble beginnings grew from the grand venue of Bushy House. The visit was finished off aptly with an ice-cream made using liquid nitrogen.

NPL estimates are that approximately 700 visitors attended the day/business sessions during the day and about 1,700 turned up for the public evening opening. Many guests enjoyed themselves so much that were asking staff when the next open day would be! It should be noted that tremendous amount of work went in to creating this public day, making the labs ‘visitor-friendly’ and all at NPL’s own expense.

Although we didn’t notice any Oompa-Loompas during the visit, we certainly felt like we had won a golden ticket to be able to peak behind NPL’s doors – thanks go to all involved in making this day possible.