Warm and welcoming Shambles now joins popular Scarpetta (try their ‘Bushy Park’ pizza!) in making their menu now available for takeaway (Shambles offers 15% discount and for both restaurants this is collection only).

The Clockhouse now have a separate restaurant area to add extra capacity to the popular eating destination.

Sammy’s is open for business again after a refurbishment and has a friendly, family atmosphere with the buzz of a modern bar and restaurant. It has an excellent lunch menu as well as a seasonal and varied monthly menu and the popular Sunday roast a particular favourite. There are real-ales, modern lagers and a carefully selected wine list. Sammy’s also has a private function room which can be hired out for parties and events.

Situated on Church Road, Al Borgo has certainly created a strong first impression with diners and now sits comfortably alongside the finest restaurants in Teddington – adding to the already strong pedigree of eating establishments in the area.

Customer favourites include some very special pastas including a home-made ricotta tortelli with broad beans and pecorino cheese. Baked gnocchi with tomato, mozzarella and basil – which is more of a traditional dish, while the Sea Bass fillet in potato crust is one of the Chef’s more modern creations, as is the delicious Beef Fillet in red wine sauce with crispy red onion from Tropea, a particular variety of red onion grown in a small area of Calabria in southern Italy.

Desserts are also a strong point – if you’re feeling brave you can try to wrestle Marco’s favourite dessert’ Chocolate Salami’ away from him! The cinnamon and caramel ice cream has to be tasted to be believed. Last but not least the White Chocolate Souffleé dessert which was created by accident when white chocolate was delivered instead of the darker variety, the chef decided to try making it regardless and a legend was born.

Finally, as one of 2,000 French Restaurants submitted for the competition, Retro recently received enough votes to warrant a tasting visit from maitre d’ Jean Baptiste as part of the F Words “hunt for the Best Local Restaurant” but sadly didn’t make it through to the final cook-off on the show (although they could be seen in a couple of brief shots during the programme). 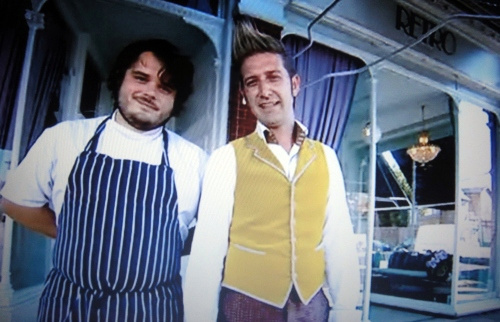