BBC Weather are predicting a “major snow event” starting tonight across central and southern areas of England – and the Met Office have issued an emergency weather warning for very heavy snow which could be the deepest falls seen in the area for many years.

The exceptionally low night-time temperatures down to -5C are set to continue until at least the end of the week with the unwelcome addition of increasingly strong winds, some forecasters are citing no let-up until towards the end of January. Council gritters will be out in force again keeping our roads and pathways clear. 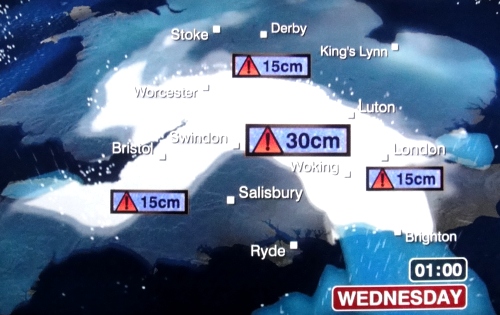 Significant disruption to travel is expected throughout the day especially starting in the counties north and west of London and then as the heavier snow is pushed further east across London throughout Wednesday. Keep up to date with the latest weather reports and consider that even if you can get to work tomorrow, you may have severe problems getting home!

South West Trains have already issued a bulletin detailing the revised timetable service that they hope to be running from tomorrow (Teddington loop to Waterloo currently is predicted to be OK) but with some branch routs such as Teddington-Shepperton will not. Ensure you check the live service information pages for the revised timetable and any updates before you leave in the morning.

[Update Wednesday 6th] Despite a light covering so far, Teddington luckily (or not so luckily depending on your point of view) has been spared the predicted heavier overnight snowfall but by mid-afternoon was in the process of being enveloped by flurries of thick flakes which settled fast on roads and paths. Traffic looks to be heavy with speeds reduced, but roads are generally not dangerous.

Widespread ice could also now be a potential hazard to face after deep freeze overnight.