Residents are up in arms over the recently installed fences at Teddington Station.

Last week the older traditional smaller iron railings which had only recently been repainted, were removed on the Station Road side by South West Trains/Network Rail and replaced with 1.8m high mesh fencing topped with barbed wire. The new fence doesn’t run the whole length of the platform, it is mostly situated opposite houses on Station Road – given this, residents are querying why have it at all if the shorter, less secure older railings exist further down the road.

Local residents have described the new fences as ‘prison-like’ and taking the station further away from the ‘countrified’ ideal that has won stations such as Kew awards for their floral and friendly look which encourages tourism. 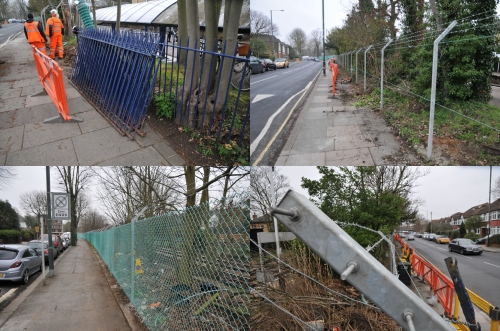 Brian Holder (Teddington Society) has requested information on the reasoning for the new fencing – there are currently no published plans to install full barriers at Teddington Station that would require proper fencing for revenue protecting.

[Update]: local councillors and now Vince Cable has been involved to put pressure on Network Rail about whether or not planning permission was sought. It appears as though permission simply isn’t needed for such works on National Rail property and similar development is taking place along railway lines elsewhere in the borough.

Dear Councillors and Residents, I am writing with regards to your concerns relating to an alleged breach of planning control at the above site. It relates to the installation of a chain link fence with barbed wire on top.

While it is noted that the new fence is unsightly, due to its permitted development status the Council does not have any power to request the development to look more in keeping with the surrounding area. Network Rail is not required to consult local residents or obtain any consent from the Council.

Under planning law, statutory undertakers (Network Rail is one of them) are allowed to carry out certain works without needing to apply for planning permission. These are called permitted development rights.

Whilst I understand your concern in this matter, considering the above circumstances I am therefore unable to be of assistance in regard to this matter. I appreciate that this will be unwelcome news, however I do not propose to take any further action in respect of these works.

This is London article on the issue: “Network Rail’s behaviour branded ‘arrogant’ after installing barbed wire fence at Teddington station without warning”.