New comedy show “Big Man Small Hammer” is to be filmed at Teddington Studios and you can be part of the audience for what might prove to be a hit show. 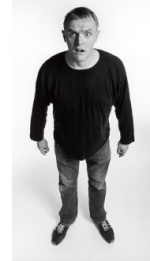 Hosted by Greg Davies, this new format unscripted show will feature 12 comics who will try to out-do each other by creating ridiculous suggestions as well as having the nerve to act them out.

The line-up so far is:

Tickets are issued via e-mail and over 18s only – check out LostInTV for details on how to apply.