The local Police Liaison Group (PLG) has released a summary of crime and disorder issues on recent trends to help locals prevent and combat particular crimes across Richmond borough. 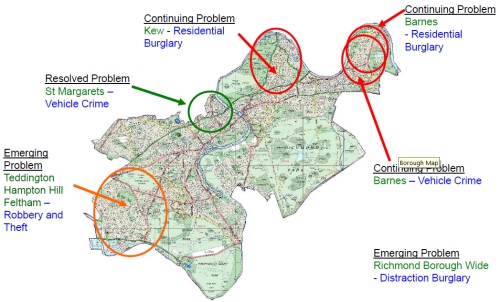 In the Teddington, Hampton Hill, Ham and Feltham areas, two men in their late teens have knocked victims to the ground and stolen bags and laptop cases in speedy thefts from a black scrambler-type motorbike (5 thefts within a week). These seem to mostly take place from 3-3:30pm but some in the early hours of the morning too. 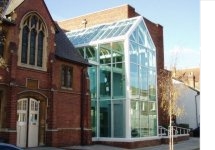 If you have crime concerns that you want addressed then you might not know that Police Liaison Group meetings are held in Teddington. The next one is happening tonight, Tuesday 8th February at Teddington Baptist Church Hall (7:30-9pm).

This is the first of these regular meetings since a familiar face in Teddington, Sgt. Pat Denholm retired from the police force late last year. The importance of Safer Neighbourhood and Neighbourhood Watch teams are made clear at these meetings.

Burglary, shop lifting and anti Social Behaviour are the three most important issues mentioned in the previous meeting. Shop burglaries have fallen in recent times due to installation of CCTV and the Town Link radio system – resulting in fines and one prison sentence.

Along with local groups, Police have again highlighted concerns about cases of imposters claiming to be from companies, utilities or charities such as Age Concern to either gain access to houses or distract residents whilst their house is burgled from a rear entrance.

Property developer Charles Scarrott been sentenced to eight and half years in jail after submitting £25m of false VAT repayment claims over a five-year period.

He pleaded guilty at Kingston Crown Court to the fraud which enabled him to buy a £1m penthouse in Teddington as well as a holiday home in Dorset and flats for both his children, and a long list of luxury items including a Maserati and expensive holidays.

[Update] The Safer Neighbourhood Team In Hampton Wick have warned residents to be extra secure and vigilant following a recent spate of attempted burglaries in the area – near Hampton Wick High Streed and Kingston Bridge last week.

Also a series of houses have been occupied by squatters recently in the Teddington/Hampton Wick area whilst they are being refurbished: The Maples, Cedars Rd, Vicarage Road, Normansfield.