Few will have been unaffected by the test road race which powered through Teddington early this morning.

By late Saturday evening, only a few cars remained parked on the route and were towed. Before and after the race however it was clear that quite a number of drivers weren’t aware of the race and related road closures and some sadly took out their frustration on the 2,800 race stewards. Many of these helpers were bussed in from around the country and had little knowledge (or indeed maps) of potential diversion routes for stuck drivers.

After the race barriers were swiftly removed and some roads were re-opened just after 10am. Others nearby in Hampton Wick and Kingston however remained in place until the mid-afternoon – causing traffic issues with buses and cars wanting to travel in this direction. 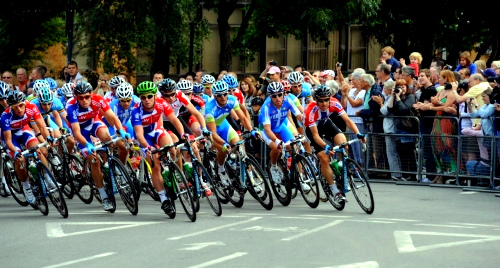 There was a real sense of community spirit as neighbours stood alongside each other waiting for the race to pass them – huge numbers lined roads through Teddington, along Chestnut Avenue in the park and towards Hampton Court. The 148 cyclists formed the middle section of a lengthy procession that included race marshals, support vehicles and ambulances. After the competitors disappeared into the distance, cyclist spectators took their turn on the route and advantage of the rare chance to enjoy some roads without any traffic.

The race itself was won by English Olympic favourite Mark Cavendish in 3hrs 18mins. Although not broadcast live, highlights will be shown on by the BBC next weekend.

As well as testing the logistics of such wide-spread road closures and preparation, one of the reasons for this test race was to receive feedback from residents and race-watchers. Any comments posted below will be collated and forwarded on to race organisers to help the real race run as smoothly as possible.