News that Scarpetta has closed has shocked regulars who have been turning up to eat at their favorite restaurant over the past week to find the windows covered and a note that states that the property has been repossessed by the landlord.

As one restaurant from the high street disappears another is rising from the ashes. After just over a year of absence Ristorante Sorrento will be re-opening in a few weeks. Following an 8-year break, Carmelo, his son David and brother Giovanni will return to the newly refurbished restaurant.

Traditional classic Italian cooking will be back on the menu and their famous sweet trolley will be making a welcome return. The restaurant will open at 8am to serve breakfast, followed by a fixed price lunch menu and in the evening the a la carte menu will be available with seasonal daily specials including Lobster, Dover Sole and more. 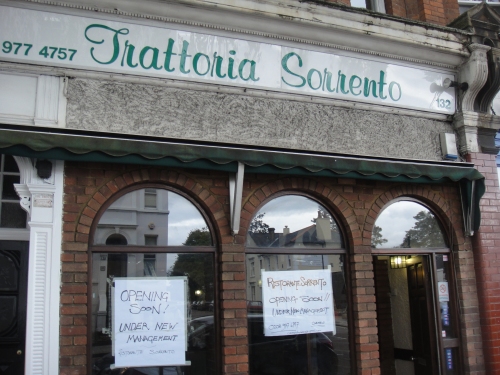 The Park Hotel recently had planning permission refused to use more of their car park area for additional outdoor drinking & dining space. Richmond Council believe that the hotel already doesn’t provide enough parking space for this business in an area where the pressure on parking spaces is high.

Barnados are hoping to move into the vacant Nicholas wine merchant space but their plans to change the front of the building were refused permission. Selwyn-Smith Studio is now closed following declining sales and competition from stationers elsewhere on the high street.

At the other end of the high street, another new nursery is being planned opposite Nova Fortuny but neighbouring offices are concerned about the lack of parking available for dropping off & picking up children. The nursery would have its entrance on the high street and nearby roads area already busy with parked cars.

Kings Head White Brasserie will soon be celebrating its first anniversary – how time flies! They are hosting a few special events with live band nights and a special menu to celebrate the milestone. This business model is clearly working well – the resaurant continues to receive good feedback, is regularly busy and the group has plans to increase the number of brasseries from the current 9 to 40 in the next five years.

Although already open for business, The Orange Tree Clinic (above KC Pharmacy) will be hosting an official opening day on 23rd September along with the deputy mayor, Presecco, cupcakes, treatment discounts and demonstrations.