A police raid on a south-west London scrap metal dealer’s yard has led to the discovery of a major haul of stolen items as part of the Metropolitan Police Service crack down on this illegal trade. 150 intact memorial brass plaques with inscriptions of names and messages from loved ones were found in the haul along with an intact church cross.

The most unusual find here though was a distinctive bronze dragon statue – quickly identified on the stolen arts database as originating from Teddington. The weight of this item shows how much effort thieves put into the illegal scrap metal trade – it weighed over a tonne along with it’s concrete base and required four men to originally put it into place! The statue, worth over £3,000 was one of a pair stolen from a Teddington garden overnight. 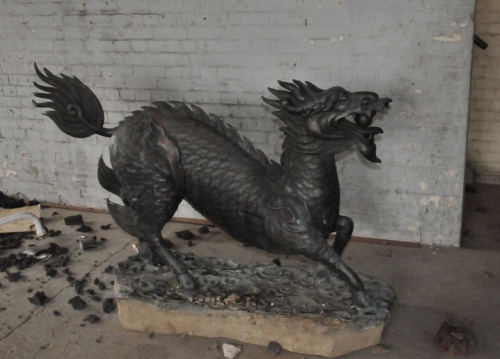 £20,000 in cash and copper cabling was also found – cable is stolen from train signalling equipment causing massive delays on train networks and a recent cable theft in Hampton left some residents and businesses without phone or internet access for several days.

Around 100 metal thefts are reported across London each week and an increasing number of objects are stolen including cables, drain covers, lift panels, playground slides, fire escapes and cemetery memorial plaques.

If you see what looks like legitimate workers removing cable (even in high-vis vests) they may be taking cable illegally – some crimes are stopped by eagle-eyed neighbours calling the police as they are still occurring. The theft of metal from homes and building sites has been noted around Cedars Road, Vicarage Road and High Street in Hampton Wick over the last year – items are usually taken by lorry/van and even some metal dustbins have been taken with the rubbish still inside.