Writer, comedian and Teddington resident Viv Groskop is about to have her first book launched: “I Laughed I Cried: How One Woman Took on Stand-Up and (Almost) Ruined Her Life“.

The book catalogs Viv’s brave foray into the world of stand-up in which the phrase ‘in at the deep end’ only hints at the enormous challenges that lay ahead as she attempted a comedy marathon: 100 gigs in 100 nights.

The journey is told with annotation of tears of joy and misery, heckling, self-loathing and occasional laughter, but ultimately the willingness to realise ambition whist hurdling terrifying obstacles! 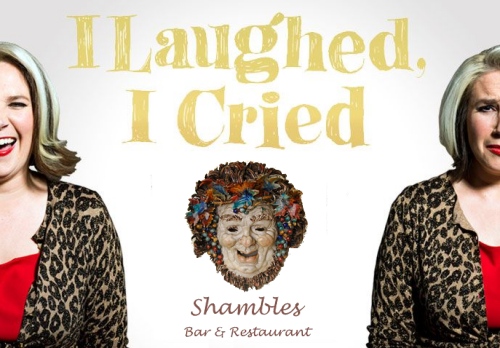 The book has already won praise from comedians and reviewers. Sally Phillips from TV’s Miranda: “This is the working mum’s version of Eddie Izzard’s 50 marathons in 50 days. Hilarious.” Caroline Quentin: “Viv Groskop is crazy, clever, brave and kind. But mostly she’s crazy. A real insight into a secret world.”

Viv will be at a “Meet the Author” book launch at Shambles on Thursday June 27th at 8pm in the garden for an hour. This will be an informal chance to meet Viv, enjoy a drink & mingle with others and to have a copy signed. Also if you fancy staying for dinner, if you bring along the leaflet from Waterstones you’ll also receive a 10% discount off your bill at Shambles for the evening.

If this leaves you hungry for some comedy in the flesh then check out the Dead Parrot Society regular stand-up comedy evening that has now moved to the Royal Oak – hosted by Viv, the next one is this Friday 28th June.