Last Thursday Richmond Council planning committee met to determine whether to grant or refuse the plans for a Sainsbury’s Local store in the building that Calligaris currently use.

Many local residents made their feelings clear by attending the packed meeting. Although Sainsbury’s attempted to address the concerns of local residents, the Council rejected two of the three seperate applications so Calligaris can remain trading from this location. Sainsbury’s have six months to appeal the decision but given the strength of the argument against, this may be unlikely. 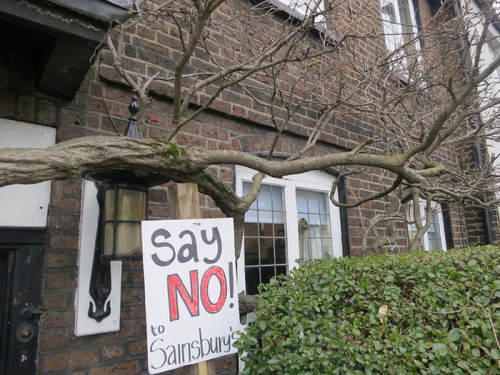 The grounds for the unanimous refusal were traffic concerns and inappropriate signage deemed to be detrimental to the Conservation Area. The increase in visitors by car would affect highway safety, particularly in Langham Road and the low number of off-road car parking spaced provided (6) would lead to an overspill of cars to create an adverse impact on the character of the area. One traffic report estimated that there would have been 7-10,000 trips per week into this residential area. You can view the recording of the planning meeting online here.

The team that campaigned against the plans consisted of a group of concerned residents, The Teddington Business Community, The Teddington Society and were represented by a barrister who specialises in cases such as these.

The costs of funding the reports and legal fees have been fronted by two families living opposite the site – if any of the hundreds of those who objected would like to help by donating to cover these costs, any amount would be greatly received. Details of how to donate can be found on this page.

[Update 26/10/2013] Some residents have received a letter from Richmond Council announcing that Sainsbury’s will be appealing this planning refusal decision.