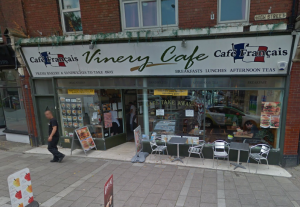 The Vinery will be officially closing on Monday 2nd May. The below tweet shows a notice that Jimmy the owner has left on the window to show his thanks to all of his customers over the years.

It is not yet known what kind of shop will be taking its place and there’s been plenty of speculation and thoughts flying around our office. What would you like to see in its place? Another Sainsbury’s local???

Sadness. ‘This is the end…. ‘ pic.twitter.com/LyJVkJU0h9

It’s extremely sad to see a business that has served the community for 22 years close down, and we would like to wish Jimmy and his staff the very best for the future.

Here’s what some of the locals had to say…

Gutted to hear that the Vinery in teddington is closing down.. @Teddington_Town

@Teddington_Town have you heard that The Vinery Cafe is closing down on Monday 2nd May? Everyone @bowelcancer gutted #nomorefalafelwraps

@Teddington_Town @grahamkelly @bowelcancer Disaster. My friends who work there have found other jobs. But a hammer blow to town.