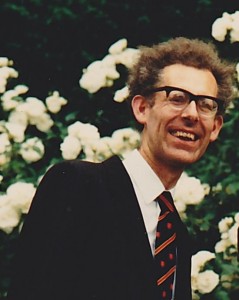 Close to one hundred people gathered in the blistering sunshine on Teddington’s slipway to attend the formal naming ceremony and dedication service for the new inshore lifeboat, funded by Hilary Saw.
Hilary generously donated the lifeboat in memory of her late husband, who himself was one of life’s most enthusiastic, loyal and hard-working volunteers in the community. Peter was a great admirer of the work done by the RNLI and he and Hilary had previously donated the D-Class lifeboat D-743 to Teddington, named Olwen and Tom after Hilary’s parents.
Teddington’s Lifeboat Operations Manager, Tim Ody, welcomed all present and began the ceremony with a resume of the work of the London lifeboat station. Tim said: ’It has been five years since Hilary and Peter donated the Olwen and Tom and in the period we have launched on 302 occasions, rescuing 52 people.’
The donor, Hilary Saw, then spoke of how proud she was of the work of the RNLI’s operational team, the loyalty and energy of its fundraising team and the phenomenal generosity shown by the families of all involved with the RNLI. 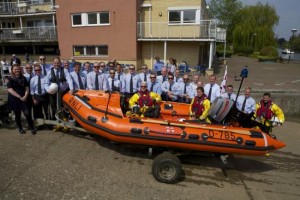 Speaking with great pride of her late husband, Hilary then concluded by passing the new lifeboat formally into the care of the RNLI.
Teddington lifeboat station was truly honoured that Charles Hunter-Pease, Chairman of the RNLI, was present to accept the lifeboat on behalf of the charity, who then officially handed her into the care of Teddington RNLI.
A simple yet moving service of dedication was conducted by Reverend Joe Moffat, Chaplain to the station and Vicar of St Mary’s with Albans, Teddington, and out of respect for Peter Saw’s lifelong teetotalism, sparkling water, rather than champagne, was used to christen the new rescue vessel.
Following the ceremony, guests were given a short demonstration of the boat’s capabilities. The lifeboat is highly manoeuvrable and specifically suited to shallow water and confined spaces. It carries up to three crew members and five casualties, and is powered by a 50hp outboard engine.
On reflection, Hilary said: ‘What a fantastic day. The huge amount of work done before and on the day by the RNLI’s events team, the volunteer crew of Teddington lifeboat station and other RNLI staff, ensured a smooth, very enjoyable and very well attended naming ceremony.’
The volunteers of Teddington lifeboat station would like to thank Hilary for her hard work. Hilary is now an integral member of Teddington lifeboat station and, continuing her generous contributions to the RNLI, has recently become the Chairman of the Teddington Lifeboat Management Group.
Volunteer helmsman Matt Allchurch added: ‘The organisation and support prior and during the event was fantastic and it was great to be able to welcome so many friends and supporters of the RNLI, as well as representatives from our flank stations Chiswick, Tower and Gravesend.’
The RNLI is a charity that relies on voluntary contributions to enable its volunteer crews to go to sea to save lives. Teddington is one of three London lifeboat stations along with Tower and Chiswick, with a fourth located further west along the river at Gravesend in Kent.
Tweet