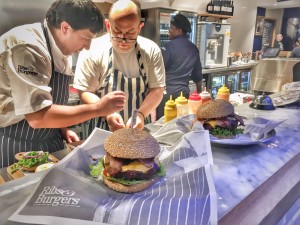 If you live in Teddington and haven’t heard of the opening of Ribs and Burgers on Broad Street earlier in September then where have you been hiding?!

Replacing the much-loved Bilas Tandoori, which closed down in the Summer, the Australian brand have moved in with great fanfare, opening their first branch in the UK and choosing the great people of Teddington to be the first to try it out.

It’s a hard job but somebody had to do it – our very own Matt got the short straw and made his way to the restaurant last week to see what it had to offer.

The first thing that hits you, aside from the striking blue shop front and smart interior, is just how FRIENDLY everyone is – from the moment you walk through the door (and by the way, for 6pm on a Thursday it was already buzzing in there) you’re made to feel incredibly welcome, you’re shown to your seats (you can’t book by the way), given a menu and then the process of ordering is explained. 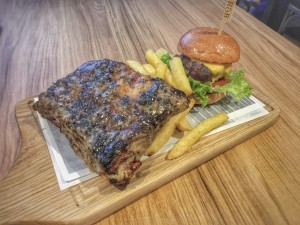 It works much like Nandos – you choose what you want to eat and drink, then you order it at the till, and you’ll usually receive your drinks quickly, and your food “within about 15 minutes from when you order”.

Everything is cooked fresh at the grill once you’ve ordered – it’s an open kitchen and it’s amazing to see the chefs working so efficiently as a team – and equally amazing to see how they all manage to fit in there at once!

The food they subsequently turn out is absolutely delicious. We had the Pocket Burger and Lamb Ribs combo. The burger is 3.5oz of beef in a brioche bun, with lettuce, tomato, onion, cheese and their infamous Auntie Joan’s Pink Sauce. Although it’s only a small burger (it’s meant to be – you can get them over twice as big if you want to) – it’s filling and delicious – they cook it pink in the middle but if you want it well done you just have to ask.

The Lamb Ribs had a real distinctive flavour to them – the lemon and herb sauce they’re basted in was delightful – if we had one criticism, they were a little fatty for our specific taste, however if that’s what you like then you’d be in your element – and there was still plenty of meat to be had in fairness. Great value at £13.90 for the combo too, especially as it came with fries! 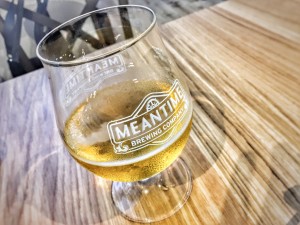 We were far too stuffed to try dessert, (and the milkshakes looked fab) but we did have a Meantime craft beer which went perfectly with the food – apparently they worked hard to find beers that perfectly complemented the marinades and sauces rather than the meat itself, and this showed.

The unsung heroes were the thin crispy onion rings we ordered on the side – almost like a deconstructed onion bhaji – really crunchy and great with the variety of sauces available on the table.

So can a burger and ribs place really work in Teddington? This was a question all over our news feeds when news of this opening was announced. Well, the answer is YES.

Take your kids there after school, or sneak a couple of beers and some great food with a mate or a loved one as part of a night out – it has something for everyone and you won’t be disappointed.