On Sunday 26th November, five energetic cyclists from Teddington will be heading to London Fields Lido
in Hackney, marking the end of their year-long #cyclelido challenge.
Since December 2016, they have been braving all weathers, from ice and snow to intense heat, cycling
to each of the 13 open air swimming pools in London. Each journey involves cycling to the lido,
swimming approximately 20 lengths and then cycling home to Teddington. 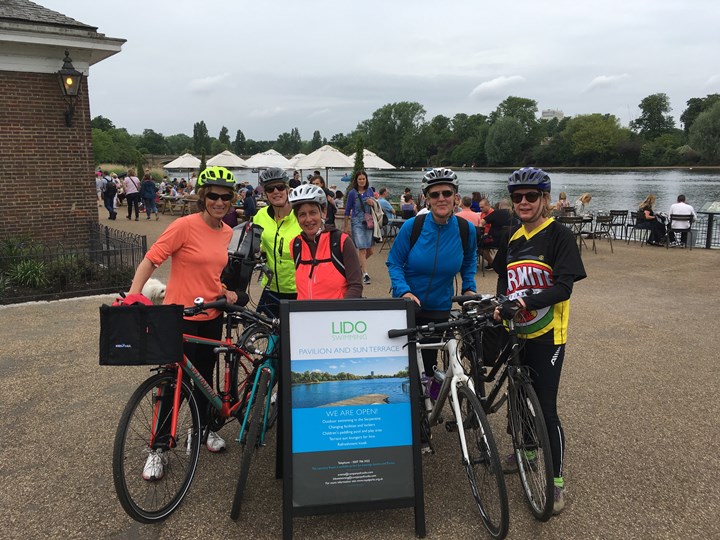 What started as almost a throw-away suggestion by Sally was eagerly grasped by Cathy, Fiona, Di and
Charlotte and they saw a great opportunity to have some fun whilst raising money for something
worthwhile. Three of the gang had become involved with the Princess Alice Hospice in Esher whilst
cycling in the Nightrider challenge and all five had connections to people who had been cared for there,
so it was the obvious choice.
The group have had many adventures along the way and have loved exploring London by bike, even
though traffic has been hairy at times. The lidos all have their own personalities, and the communities
have all been very welcoming. Most pools have waived entrance fees, allowing them to donate the
money directly to the charity. The water has varied widely in temperature: our local pool Hampton is
the warmest at 28 degrees and the coldest swim so far was at the unheated Hillingdon, which was a
breath-taking 16 degrees. The experiences have been very different, ranging from wild swimming in the
Hampstead ponds and the Serpentine to the gleaming space-age stainless steel surface of Parliament
Hill Lido.
It has been a fantastic year. As well as cementing great friendships, they have all surprised themselves
with what they have achieved physically. All five have sons and daughters flying the nest, and what
better way to cope with that than to take on a challenge like this? They are already making plans for
next year…
If you’d like to donate even just a small amount to encourage them for the last leg of the journey, you
can do so here:
https://www.justgiving.com/fundraising/cyclelido