THE community support group SporTedd is delighted to announce its inaugural grant for Eel Pie Island Club Stand Up Paddleboarding (EpicSup), based at Twickenham Rowing Club on the banks of the River Thames.

Former gold and silver medal winning Olympic rower Mark Hunter MBE handed over a cheque for £500 to the club this week, which will help provide important storage space for the fast-growing pastime across all ages. 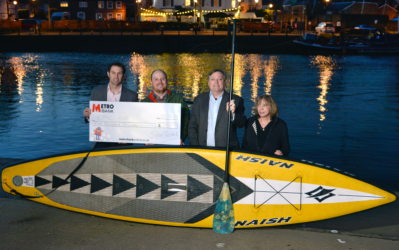 In handing over the cheque Mark Hunter, who won a gold medal in the lightweight double scull event in Beijing in 2008 and silver in the same event in London 2012, said: “It’s fantastic to see the River Thames being used for more and more healthy activities and paddleboarding is one of those hobbies which is very accessible to people of all ages and really taking off all over the country.”

Epic Sup co-founder and secretary Teresa Read said: “We are really grateful to SporTedd for their support, especially as it is their first grant,  and the money will help us in a very crucial way to keep our equipment safely stored as we attract more and more members.”

SporTedd (www.sportedd.co.uk) is a group of local men and women who live in or around Teddington, Hampton and Twickenham and have an interest in sport or a connection to sport through their daily lives in business or leisure.

The group’s prime objective is to raise funds and support local sport-related good causes, which can make a difference in the local community. EPIC SUP is the first fully constituted voluntary club on the Thames and is affiliated to British Canoeing. At SporTedd’s latest meeting England and Harlequins legend Jason Leonard talked about the Six Nations and England’s prospects in the Rugby World Cup next year.