This years Chestnut Sunday is upon us and just like last year the weather isn’t starting the day looking too fantastic but don’t fret – rain isn’t forecast and it’s likely to brighten up throughout the day.

The fair has been in place all weekend and was joined by some overnight visitors in the form of a small military contingent who camped in the park. They will be providing visitors with demonstrations and the occasional firing of their full size cannon (take note dog-walkers).

Teddington’s Park Lane Stables will be joining the parade and afterwards offer pony rides which will be available with printed photo memento to take home. If your kids are fans of BuildABear then get down to the pony rides stand where goody baskets are waiting for the first customers.

If you’re joining the parade from the direction of the high street then pop into Astrora coffee roasters on the way where cookie and fresh coffee samples will be available to celebrate the event. 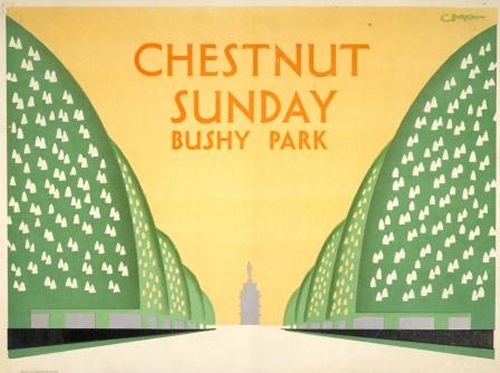 [Update] The sun only made an appearance or two but the slight chill in the air didn’t dampen spirits and the turnout was still impressive as always. Some new additions to the festivities proved to be a hit (Horse Rangers synchronised arrangements, military artillery and gun demonstrations and historic group with musket firing) but unfortunately this didn’t agree with the nearby horse rides which had to close early due to this.

Generous contributions to the various stands generated a lot of money for various charities including Help4Heroes and the Royal Parks fund to raise money for statues to complete the Water Gardens so thanks to all those who attended.

The military contingent was particularly strong this year – giving an apt tribute to the military history of the park. Since the tradition of Chestnut Sunday started again in 1993 it has been growing steadily in popularity – next year the main fair and attractions are planned to be twice as big as this year.

[Update] Video coverage of the day:

One thought on “Chestnut Sunday kicks off”