Those visiting the centre of the park (or driving through it) will be delighted to hear that gold-clad Diana fountains are now fully operational after all the restoration work.

The next stage of the park improvements and traffic reduction will mean the removal of one of the larger central car parks to further reduce traffic on this side of the park.

The updated maps now on notice boards around the park show that the car park (in blue on the below map) has been removed and visitors will now be expected to use the new car parks at the Pheasantry Welcome Centre and Clapperstile area. Nearby cricket/rugby clubs are yet to hear if traffic will be restricted on roads that lead to their own car parks. 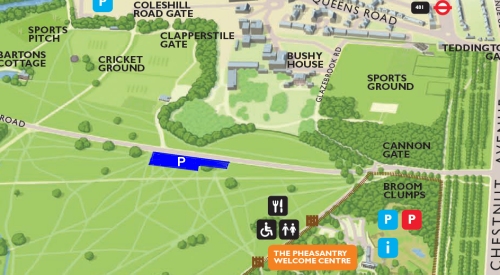 If this weekends heat wave peak numbers are to be repeated, the successful lure of coffee, cake and ice-cream at the new Pheasantry Centre might add to a squeeze on parking spaces over the summer.

Ever wondered what the abundant grassy mounds of earth are in the park? These are actually yellow ant hills – the result of many generations of thousands of ants toiling away to create their functional home which collects warmth from the sun and keep it, acting like a storage heater. The larger the mound the older they are – some are decades and even centuries old!

Combined with the parks rabbit-holes, the mounds make running off-track quite hazardous in the park. They are spaced out between rival colonies and provide a greater diversity of flora and fauna in the parks grasslands. Park visitors are asked to not disturb or destroy the mounds by standing or walking over them. 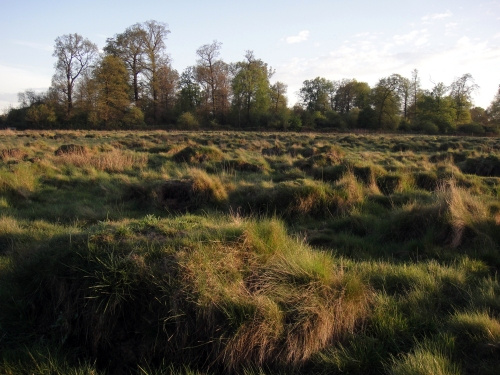 You can find out interesting facts like these through the various talks and meetings hosted by Friends of Bushy and Home Parks that occur throughout the year. Their next talk is this week on the 27th – and is about Wildlife Photography.

If you don’t manage to get tickets to any of the Olympic races in venues across London, fear not because some may be coming to us! After early proposals were rejected, the new proposed route for the 138km road cycle race will include Bushy and Richmond Park before heading off back towards Westminster, Chelsea and Fullham before finishing on the Mall.

Bushy Park will also be the start/finish line for the Three Parks Challenge on Sunday 20th June this year. Shooting Star is hoping to match the £50,000 raised last year (the first time this walk was held) whilst giving the opportunity for walkers of all ages to take in the beautiful scenes and landmarks of the boroughs Royal Parks.

This year it’s also the 5th birthday of Shooting Star so hopefully even more walkers than last years impressive 300 will turn up. There are 15, 8 and 3 mile routes to choose between. The full route starting in Bushy Park will take you through Hampton Court (Home) Park, a river view through Kingston then on to Richmond before heading back to Bushy Park.