Teddington Cricket Club is currently competing the ECB National Club Championship and in their first round match against East Molesey they were determined to rectify the disappointing loss to league champions Ealing on the previous day.

Having won the toss and elected to field, Teddington’s bowlers bowled good lines and lengths on a dry Teddington wicket, building pressure and frustrating the opposition. However, it took the introduction of Alex Gledhill for the first wicket to fall, removing Vanoli-Salmon for a hard-fought 22. He was to be the top-scorer for EM on the day; incoming batsmen failed to connect with attempted hoys off the spinners, while the seamers managed to generate movement of the deck to find the edges. Mark Phythian was faultless behind the stumps with 4 catches. Aided by the crumbling pitch and strange shot selection, both Gledhill and Andrew Clarke finished with excellent figures of 3-12, reducing the visitors to 79 all out. 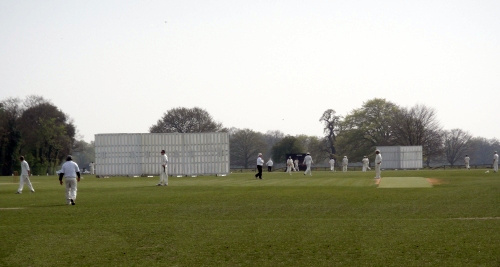 Ben Duncan and Max Page opened up for Teddington, however Page’s attempt to caress one through the covers on the up ended up in mid-off’s hands. Having watched this from the other end, Duncan decided that kitchen sink bludgeons were the order of the day. This tactic paid off and the game was sealed after just 12 overs despite a small rain interruption with Duncan 46 not out. Despite a limited opposition, Teddington can take a lot of positives from this game into the second round, where they will travel to Billingshurst in Sussex on Sunday June 6th.

Teddington international runner Jo Pavey is back competing in races to put her on a path to the Olympic Games in 2012. She recently finished fifth in the Great Manchester 10km road race and despite being the first British woman to finish, sees the result as a disappointment.

This was only her second race after giving birth to son Jacob last September (who was at the finish to support his mum!). Jo will now focus on achieving a 10,000m qualifying time for the European Championships in Barcelona at the end of July.

Not content with winning the Rugby Junior Vase at the home of Rugby last weekend, one of the players rounded of his perfect day by proposing to his girlfriend on the pitch at Twickenham.

Simon Hall, a police officer from Twickenham station had been planning the proposal for a little while and thankfully girlfriend Carly agreed to marry him there and then.

Simon and team shouldn’t rest easy on their victorious 30 match run though, now that they are promoted to the London Leagues, head coach Giselle Mather thinks that their main obstacle to success next season will be their general fitness. The coach is however happy for the team to revel in their achievements for now to aid team spirit which is a good thing considering the celebrations after the match were so intense that their pub ran out of beer by 8pm!

Sixteen top women’s rugby teams including Teddington will battle each other in the Scrumqueen’s Women’s 7s title in Richmond on June 12th.

The “Rugby Rocks” Tournament will take place on Richmond’s main grounds as well as pitches nearby in Old Deer Park. After the matches have finished, live music including Feeder, the Parlotones and Just Jack will rock the crowd. Also being shown at the venue will be Englands first World Cup football match.

The Bushy Park-based Teddington team will only have just returned from a 10 day tour of Kenya so hopefully they will have recovered quickly enough to do us proud.