If you’re wondering what all the sirens are about, there’s a huge fire at Green Lane scrap yard in Hounslow that has been burning since 4pm today – scrap cars and a diesel tank are involved in the blaze. The fire is believed to have been started by exploding gas canisters due to the hot sun today. 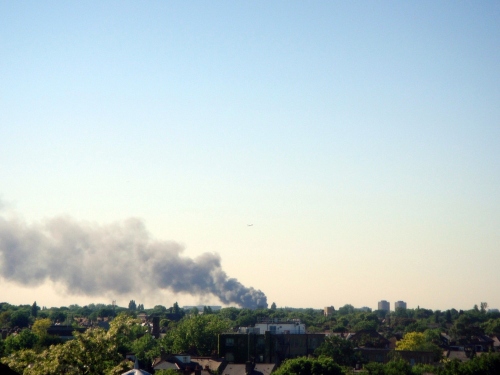 Plume as seen from a high vantage point in Teddington

Surrounding routes have been closed off and planes are being diverted away from the smoke to the north runway until it clears.

[Update] Ten fire engines and 50 fire-fighters from surrounding areas were involved in tackling the blaze which set alight 110 cars. The fire was under control by 7pm as a new shift took over to continue damping the area down.