Much like the rest of the country, Teddington is in the grip of World Cup fever! Locals will be spoilt for choice for see how their chosen team favours in the competition.

The Teddington Arms has three screens and a host of World Cup celebration goings-on in aid of Princess Alice Hospice including games, prizes, Fantasy League, foosball tournament, blind sweepstakes, a haven for the WAGS and the usual great food. Tables are bookable so grab a good view in advance.

The ever-stylish Bloated Mallard has three screens to watch the games – two downstairs and one upstairs in their large function room. Bar food is available until 10pm and World Cup beer Offers include 3 x Bottles £10, 2 Pint Pitcher £7.00, 3 Pint Pitcher £9.00.

The Builders Arms are ensuring that their strong reputation as a sports viewing destination remains firmly in place and you’re sure not to miss even one second of the matches due to their four large indoor and one outdoor screens, BBQ to accompany matches and also beer bar in the garden. 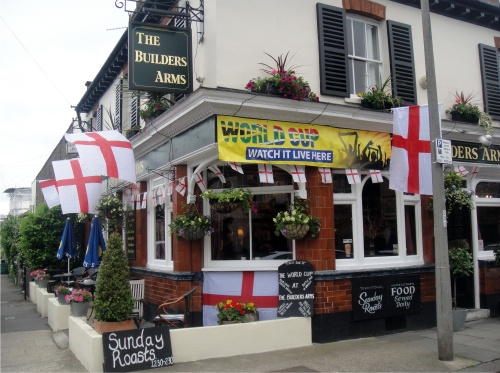 Watch the matches on a giant 50 inch plasma screen at Sammy’s Bar – tables can be booked as can the function room if your have a large group and you want guarantee your own space.

The Queen Dowager is having World Cup sweepstakes, all England matches are being shown and each match day will include different food and drink promotions.

Every match will be shown on the many large screens at the Hogarth, if you don’t want to fight it out with the crowds and fancy guaranteeing your own space, The Anglers are showing matches to private parties – you can hire a marquee space in the beer garden and have a BBQ feast during the match too.

Enjoy the great traditional English pub food at the Adelaide whilst watching the matches on their screens – one large, one small downstairs, or their other large screen in the function room upstairs. 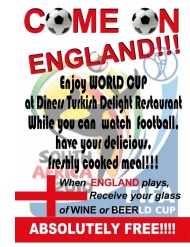 If pubs aren’t your bag then why not try Diners Turkish Delight who will be showing all the England matches along with a free glass of wine or bottle of beer with your meal to celebrate England’s progress through the competition.

Members of NPL Sports Club will benefit from the club showing all of the World Cup games in HD on four screens in the pavilion. NPL Sports Club isn’t just a sports club! It hosts some great music events and is a real ale centre.

England’s pool games will be accompanied by special food menus (including traditional fish and chips), drink offers such as four-pint jugs of London Pride and Fosters and customer competitions including best-dressed supporter prizes.

Finally if you want to escape from the football but still benefit from the occasion, restaurant Scarpetta are also offering a free bottle of Marche Bianco, Marche Rosso or Pinot Blush with every table of four or more booked during the World Cup.