The news that campaigners have been waiting is finally in writing: the Richmond and Bushy Park proposed parking charges have now been officially cancelled by Conservative Tourism and Heritage Minister John Penrose.

Despite signs that the scheme was doomed to be scrapped, opponents were still being asked to register their objections against the council planning application page which has probably smashed all records for the number of comments submitted!

His statement on the matter: “Plans to introduce car parking charges in these parks were the subject of fierce public opposition from the moment they were first proposed, some 18 months ago, and the local MPs have been lobbying me hard so, after discussing it with them and with the Mayor’s office, I’ve decided to scrap the idea immediately. Given the current economic climate, we will need to find alternative sources of income instead, but we will try to respect local residents’ views and preserve the environment of these wonderful and precious spaces too.”

One scheme being considered is a monthly farmers market in Richmond and Bushy Parks that may include the sale of park-reared venison. 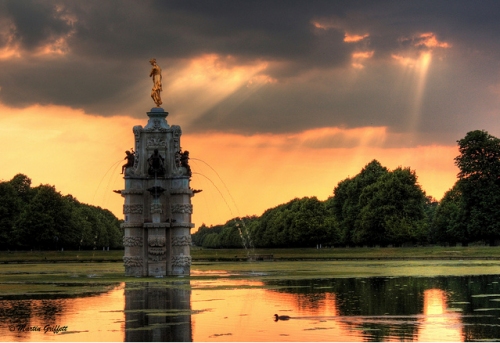 One of the sights that will continue to be enjoyed for free: Diana Fountain at the centre of Bushy Park. Photo: 4orty7even

Opposition MPs such as Zac Goldsmith gave assurances before the election that the charges would be scrapped if Tories came to power and the new coalition Government has now honoured this pledge ensuring that visiting the borough’s parks will ‘never become a budget decision’.

Since the new Government has taken power some swift changes including this one have come into effect including the reversal of the planned luxury housing development on Twickenham Riverside – a piece of which was handed back to the public yesterday to be used as a sun terrace, with promises of more public consultation about the future use for the whole site.

Other changes however are in the form of huge cost-cutting to help public finances starting with the cancellation of almost £2billion worth of projects. Amongst those to be cancelled is Labours ambitious “Building Schools for the Future” programme – leaving over 700 planned school regeneration projects paused for the forseeable future.

Some schools in Teddington however are already undergoing Government and privately funded redevelopment and expansion this year so will surely be unaffected by these cutbacks. Teddington is certainly undergoing changes for the better – strengthening its reputation as a hotspot for excellent schools and regenerating run-down areas and buildings into more appropriate and attractive uses in some notable developments.

Teddington School is amongst those with planned major work over the summer holidays. To celebrate the end of the ‘old school’, pupils, staff and parents – past and present – are welcome to attend an exhibition and series of tours on Saturday, July 10th 11am-2:30pm. This will be the last chance to see the existing school before the new building is unveiled in September. For further info email: pta@teddington.richmond.sch.uk.