Thankfully due to being out of Cricket season and so late at night the building was empty and no casualties resulted from the fire. 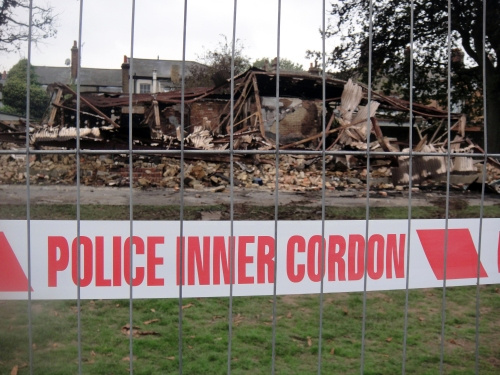 Club members will be saddened by this news especially because club photos, scorebooks and trophies stored on site were also lost in the fire. However the building was fully insured and plans are already under-way for the replacement building that will hopefully include enhancements to facilities during this process.

A note on the club website mentions that the clubhouse will be rebuilt “in a manner which preserves as much of the tradition and heritage of our 155 year old club”.

Although some walls remained after the fire, for safety reasons the still smouldering remains have been demolished throughout today and the area is currently fenced off. Onlookers who gathered to see the building being demolished today have gathered that police may be treating the fire as suspicious. Hampton Wick Cricket Club pavilion was also lost to fire but rebuilt back in 1989.

[Update] Some more info from Richmond & Twickenham Times: “About 20 firefighters battled for more than two hours to control the blaze, which broke out just before 3.13am”.

[Update] Police have released details concerning their investigation – a pile of smouldering newspapers was found in one doorway, forced entry occurred to the building and a second fire had been started on a nearby park bench.

Although insured, an appeal for funds over this amount has been launched to ensure the clubhouse is rebuilt to the required standard.