Despite having recently celebrated a victory over proposed parking charges, car users visiting Bushy Park may soon face a new obstacle to their enjoyment of this space. From Monday 8th November, one of the most used car parks in Bushy Park will close permanently. Work will soon begin after to dig up the surface of Upper Lodge Car Park to naturally regenerate this area back into grassland.

One of the objectives of the lottery-funded Bushy Park restoration was to generally reduce the impact of cars within the park – a move welcomed by general users, dog walkers and deer alike! This particular car park was actually removed from the official map back in May 2009 but since this time, the new Pheasantry Cafe has attracted more visitors to the park in general and also drawn visitors away from the main fountain car park with the lure of the new cafe – potentially leading to a squeeze on spaces first highlighted earlier this year. 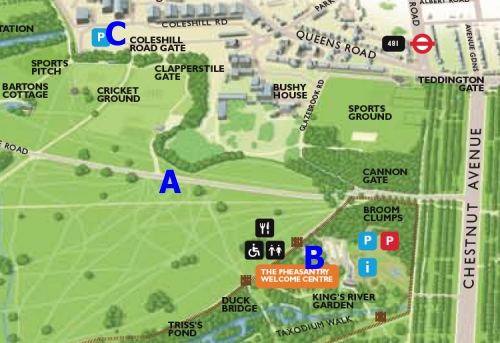 The replacement car-parks at the Pheasantry Cafe (B) and Clapperstile area (C) contain roughly as many parking spaces as will be lost here (A) but the cafe, general increased park use and changing preferences within the park look like they will now lead to an over-subscription in this area. Local groups are also keen to point out that not all of the NPL buildings in the Clapperstile area were demolished as planned (due to the newly constructed laboratories not being able to perform all the planned tasks) so the not all potential spaces were created.

Despite the lack of signposting at its entrance from Queens Road, currently the Clapperstile car park is slowly starting to be used by general park-goers but is sometimes full during sports club matches – any additional cars looking to visit the park may now add to parking pressure on surrounding roads.

If you are concerned by this issue you can make your comments known by writing to bushy@royalparks.gsi.gov.uk 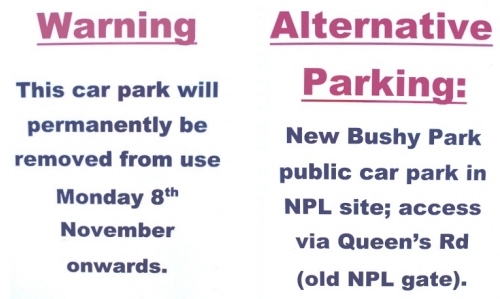 [Update 02/11/2010] this closure has now been put on hold to enable the Partnership Steering Group to consider the issue in more detail. Royal Parks would like to point out that the amount of parking would have actually increased overall after this removal. Although much of the recent correspondence has called for retaining this car park, previous comments had conversely called for its removal because this busy area affects visitors experience in the park.

[Update 24/12/2010] As a compromise ‘mid-term solution’ it has been decided that the car-park will now remain in place to be open at weekends and public holidays as an overflow space at peak times. Car-parking visitors to the park will be encouraged to use the newly created space near the NPL entrance which is currently under-subscribed (although also not well sign-posted from nearby roads) and the contested car park will eventually be turned back into parkland.