The streets were packed out for yet another successful Christmas Lights-Up evening.

As the smell of gingerbread-coffee, mulled wine and other treats wafted from various tables, kids ran from shop to shop with their faces painted and clutching their balloons and other freebies!

Lots of shops were packed out for the night as local families checked out what the new arrivals had to offer the high street. Reindeer rides were a bit hit as was the kids treasure hunt and ‘posh chocolates’ being handed out at Casa Del Habano.

Jacqueline Wilson gave a short speech before the switching on of the lights and spent most of the evening chatting to her young fans and signing books. 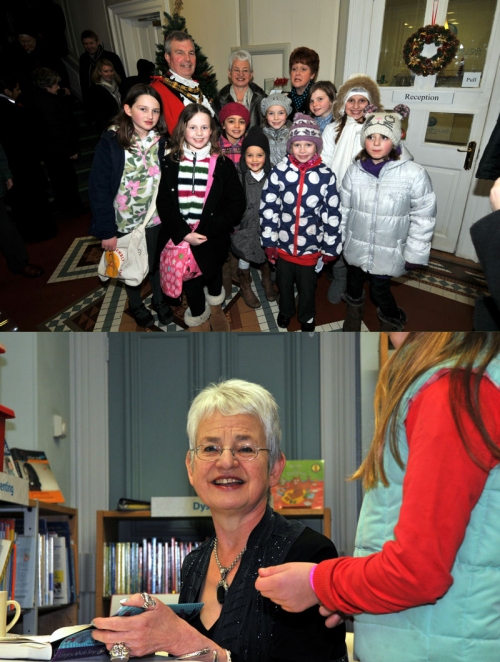 There was chaos for drivers though when unfortunately a bus broke down on the bridge roundabout – eventually move elsewhere only for a car to also breakdown on the bridge approach. Police and PCPO’s worked to get the traffic flowing again by hand-directing traffic and also opened up The Causeway and Church Road earlier than planned to help reduce the backed up traffic.

Three new shops opened to the public for the first time last night due to a tremendous effort to get them ready on time! Ellis farm shop/deli (temporarily open whilst work continues), Boho boutique and Bottega delicatessen next door to Escape clothing. Play-Inside-Out at its new location was also packed out with families checking out the new wonderland stocked full of toys and waiting in line for Santa in his grotto.

Congratulations to Francesca aged 11 (ticket 28) who won the Mela Mela raffle for a Harrods Bear – pop in to claim your prize.