Following a quiet festive period, even though Teddington volunteer lifeboat crew were on call 27/7 it has proved a busy start to the new year with three shouts.

On Thursday 6th January the crew pagers went off at 20:14. There had been a reported sighting of an object attached to a life jacket floating near Canbury Gardens, Hampton Wick. After a search & rescue operation on the D-Class lifeboat the object turned out to be a life ring with a large Teddy Bear attached!

The crew duly practised resuscitation (any practice is good practice) and the lucky bear has joined them as the latest crew member guarding the station. However if anyone in the area is missing the bear – please contact the station on 0208 973 0586. 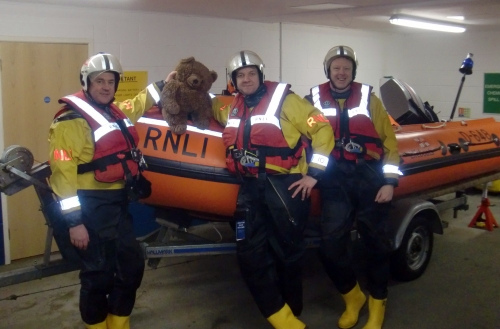 On Friday 7th January the crew pagers went off at 23:03 and Teddington Lifeboat Crew launched at the request of the Coastguard. A loud splash had been reported by a person on a houseboat above Teddington weir. Coincidently around the same time an elderly man in his 70s was reported missing in Teddington area. The Lifeboat crew held an extensive search of the river in two D-Class lifeboats. Eventually the search was called off at 1.00am when no person was found. The missing man was later reported by the police to be found safe and well the next day. 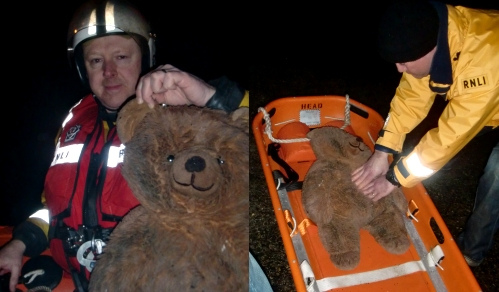 At 03:50 on Sunday 9th January 2 men were reported in the water at Kingston Bridge. The crew pagers went off and all assembled at the station to launch. It was then reported the men were out of the water and police were on the scene and so the crew were then stood down.

No matter what the situation or how much or little is known about an incident the crew are ready to launch 24 hours a day.