Recent issues with groups urban foxes in Teddington have escalated into calls for action on the matter in the local press.

A resident of Middle Lane has highlighted how these foxes have been using a den in a council depot building on nearby North Lane and have also been spotted attacking and killing domestic pets. 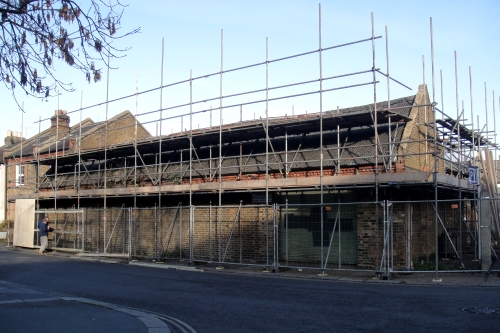 This building is now scaffolded and undergoing a program to demolish it – the structure has now become unsafe and along with other issues with its maintenance the Council has now decided to remove it.

It will become an empty space in the near future and if we hear what the future use may be an update will be posted here. Nearby residents have noted that it is currently an eye-sore but removing it will mean that the neighbouring car park will be more visible.

2 thoughts on “North Lane depot to be demolished”