With only a week to go, there are plenty of celebrations planned for Teddington to watch and commemorate the big day.

Here are the street parties and special events planned by businesses in the area (will be updated over the next week so check back nearer the time).

Even before the big day itself, Langham Road street party has won a competition! Pie Minister have awarded a huge trove of prizes including mouth-watering pies, sausage rolls, bunting, balloons and t-shirts.

This particular street party might start some healthy competition in Teddington – they have a planning group, regular newsletters and have been approached by local press, BBC, Sky, French Radio and also Japanese TV! Media around the world are now caught-up in Royal Wedding fever.

News crews are already filming party preparations all over the country, but particularly in Richmond Borough which is no surprise because it has been named as the street party capital of London. The UK is having over 5,000 street parties in total with 800 in London alone.

[Update] Haymarket in Teddington were chosen to create the official Wedding Programme which is available to buy around London and also online.

For those worrying about clearing up after street parties, Richmond Council are apparently to send a street cleaner to every official street party in the borough. As there are so many bank holidays over these three weeks, they have also released an updated list of bin and recycling collection days.

Keep an eye out for last-minute additions to high street flags – there is a special Royal Wedding pizza on display at Canta Napoli and a themed cup-cake display in La Bottega. 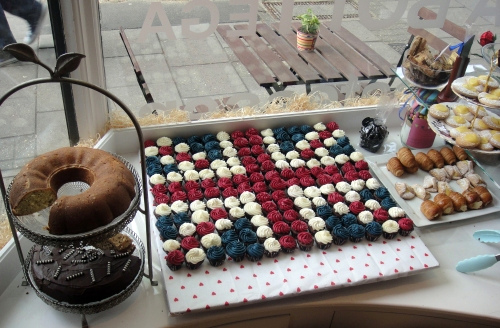