The Queen has honoured local children’s hospice Chase (recently merged with Shooting Star) with a prestigious award and the first of its kind.

The Queen’s Award for Voluntary Service is an MBE for groups of volunteers who work in their local community for the benefit of others.

This charity provides invaluable services including therapists, special needs care & bereavement support – all provided by volunteers and if you feel you could help out yourself then see here for details.

This year’s NPL Water Rocket Challenge raised £2,500 for Shooting Star and a recent fashion day at their Teddington branch brought home £1,400. To put this into perspective though, with no guaranteed funding from the government they need to raise £23,000 each day to continue to provide the 365 days a year support that so many rely on. 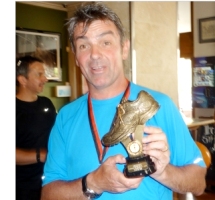 After running one marathon a day his chosen finishing line was Sammy’s where a hundred well-wishers welcomed him home.

He was inspired to attempt the fund-raising run after Chris Armstrong also raised thousands for the MS Society and because his brother has this condition.

More runners helped raise almost £3,000 in Bushy Park in the fourth annual Munday’s Fun Run for Princess Alice Hospice. More than £7 million is needed each year to provide the charity’s services and with limited NHS funding, over 75% of this is raised through voluntary donations and fundraising.

Local fund-raiser Becky Davis decided to celebrate her 40th birthday by combining the festivities with even more fund-raising! A boat party was organised to raise funds for pancreatic cancer research. The cruise from Kingston to Richmond raised £1,600 from raffle and sponsorship.

Elsewhere, on the high street, Retro Bistrot hosted a fund-raising lunch on Friday with BBC’s John Inverdale with proceeds going to schools in Africa. The girls at Kitchen Sync are running the 5k Race for Life next Sunday in aid of Cancer Research – every penny counts and you can add your support online or pop in to the shop too!

Finally last but by no means least, Teddington-based IDM are taking part in the Cancer Research Race for Life this weekend in Richmond Park.