If you haven’t yet heard, comedian David Walliams is currently attempting a swim of the entire length of the river Thames for the Big Splash Challenge, part of this year’s Sport Relief charity drive. He is hoping to cover the huge 140 mile distance from Gloucestershire to London in eight days.

Before this swim he has completed test runs including swimming a stretch from Kew to Richmond where he discovered how bad the river visibility is. He has already conquered the Channel five years ago but this challenge is the equivalent of swimming this distance every day for 8 days! The finishing post will be met by climbing out of the Thames at the Houses of Parliament next week. 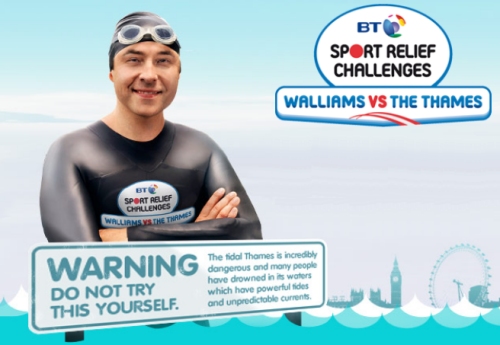 Since day three he has been hit by illness and low esteem due to illness caused by taking in water – this has put the challenge behind schedule. The plan was originally to reach Teddington Lock at 5pm on Saturday [see below for updated information].

David has spoken of his appreciation for the support of locals cheering him on – so if you can, get down to the river and offer yours. Knowing that he has already raised several hundred thousand pounds has also given him a boost, you can also sponsor any amount for this cause here.

Warnings to not recreate the feat have been repeated in every TV interview – as well as strong tidal currents, the Thames can be dangerous – he has so far been attacked by a swan, hit with oars and navigated obstacles and other river traffic.

[Update Friday 9th September]: Teddington RNLI will be escorting David through the local stretch of the Thames via lifeboat(s) for his safety and also for to monitor the crowds expected.

For last minute updates follow @sportrelief – the river team update this after any changes to the schedule.

[Update Saturday 10th September]: David is going to push even harder and try and swim the 21 miles on Sunday (starting from Windsor) to reach Teddington Lock at approx 7:30pm. He will then be ready to set off from here on Monday in the tidal section of the Thames.

[Update Sunday 11th September]: . He’s picked up the pace and made up the lost time – now to arrive just past the 7:30pm deadline.

He will be setting off from Teddington Lock at 6:45am Monday morning heading off towards central London.