The plan is to replace the traffic lights of Broad Street/Church Road/Causeway with a roundabout as part of the general programme to reduce general road congestion – particularly an issue when the current lights back-up traffic to the bridge roundabout. 15 new parking spaces would be created in The Causeway as well as a pedestrian shopping area by closing one end of this road.

A study will soon be commissioned to see if the idea will be an improvement. If so, a public consultation will be undertaken to gauge the level of support for this idea. If given the go-ahead, this work would not take place this financial year. 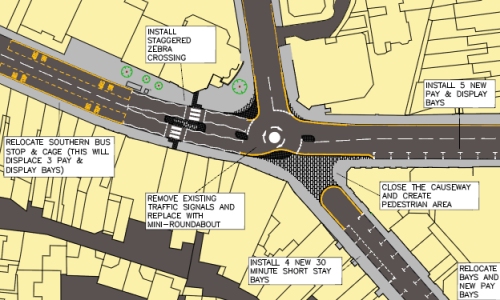 As a result of the All-In-One public feedback session, the Council is working on various ‘village action plans’ to create sets of activities and timescales that will attempt to tackle issues brought up by those who attended. One frequently mentioned comment for Teddington was the lack of parking, so a lot of thought is being given in this area. Expect more plans and further consultations for different scheme propositions in the near future.

The Teddington Society has for some time now proposed the pedestrianisation of The Causeway to create a ‘mini-town centre’ which could then be used to host events and attract shoppers in a similar fashion to Church Street in Twickenham. Another suggestion is to create free quick-turnover spaces to encourage shoppers in areas such as Church Road and around the high street in general.