The Queen Dowager pub closed it’s doors for the last time on Saturday after being sold to property developers.

A series of landlords in recent years had failed to bring in the income required by Youngs to make it viable and the most recent ones were only given 9 days notice that the pub was to close despite tripling turnover since taking it over. 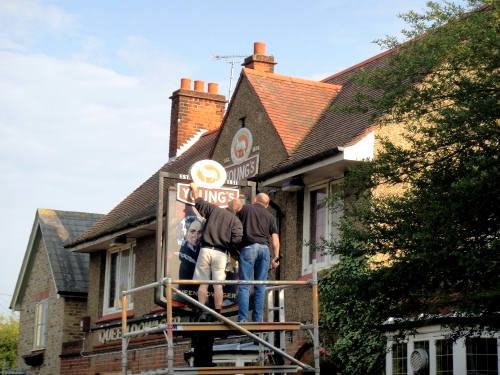 Licensees Shaun & Kathryn (pictured below) kept on smiling and wanted to go out with a bang so held a closing party with live music. They are now off to run a pub in Somerset – even further away from their roots in Burnley, Lancashire. 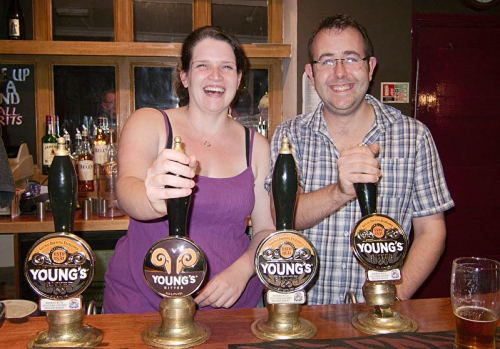 The pub sign and fixtures & fittings have already been removed and the new owners are believed be planning to turn the building residence(s), a move which will be opposed by The Campaign for Real Ale (CAMRA) who regularly oppose the change of use of pubs to residential or other business types.

[Update] a short history/obituary for the pub courtesy of the Richmond & Hounslow branch of CAMRA: A small village beer house has stood in North Lane, Teddington since at least 1747. It was previously called the Two Lawyers or Jolly Lawyers and was subsequently leased by Young & Bainbridge in 1860. It was rebuilt in 1906-7 but, like the Abercorn Arms, remained a beer house until it was granted a full licence in 1950. The pub was refurbished and extended in 2003. The former public bar was opened up to the main bar. The name commemorates Queen Adelaide, the widow of William IV.