Regular visitors to the Shell petrol station on Kingston Road will have noticed that stock is becoming noticeably absent from shelves. This is because it’s being deliberately run-down as part of the garage’s closure.

In approximately two weeks Teddington will lose its last petrol station. Rumours about what this site will be used for range from retail to residential. A recently re-posted planning application made in 2000 points towards a mixed residential development: eight one bedroom flats, two two-bedroom flats and two two-bed bungalows. 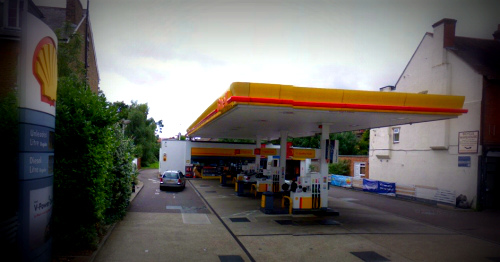 Jet garage on Stanley Road was also demolished some time ago to become a mixture of residential and office space (now home to Chiropractors bakclinic).

[Update 02/11/2011] See below comment – Shell have replied to a request for info on this closure and their reply is that there 9 other shell petrol stations within 5 miles of this one all on major roads into Teddington. This property will indeed be replaced by a housing development.

Also local councillor Tony Arbour was asked to comment and replied:
“I am too am sorry about the loss of the petrol station, but its closure is a matter solely for its owners. So far as the previous consent is concerned it is no longer live but shows what might be acceptable. I think the current proposal is an overdevelopment.”

One customer reported today that this petrol station was only taking cash-only payments this morning and another was informed by staff that it will close on November 23rd 2011.