Over the last week or so, many park users have experienced close encounters with at least one deer in Bushy Park – some may have unknowingly got too close at this particularly dangerous time of year, but others have mentioned being chased and charged at despite keeping their distance.

Even dogs on the lead are at risk and sadly this week, one puppy was kicked and another was crushed & killed by a deer that believed it was defending its young. If all the reports are relating to the same animal, it has been acting in this aggressive fashion in a triangle between Teddington Gate, Sandy Lane and also spotted by Hampton Court gate. 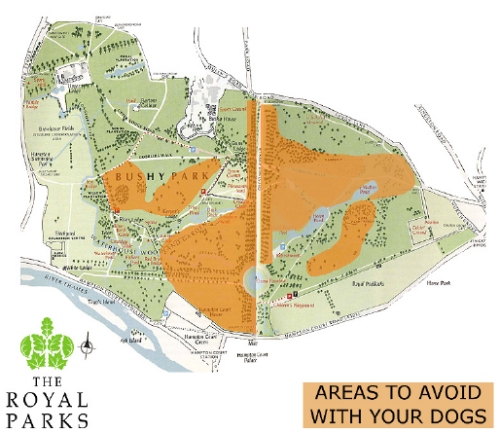 Each year the deer give birth in the shaded areas above before the bracken growth is high – this cover is important to the deer that they use it to hide their young. The lack of shelter will mean an anxious period for the mothers. Even if you haven’t experienced problems with your dog being near the deer previously, the deer tend to react badly to dogs during the birthing season.

[Update] The increased incidents involving deer have been mentioned in the press – Richmond & Twickenham Times and Telegraph.

[Update] Royal Parks have now published a news item for Bushy Park with updated advice including: “We advise that dog walkers avoid deer, particularly in the nursery areas and keep their dogs on a lead elsewhere. There are clear deer warning signs in the parks providing deer advice. If you are approached we recommend that you retrace your steps. Dog owners might wish to consider walking elsewhere for the next few weeks.“