Forming an important part of the Thames Diamond Jubilee Pageant are the Dunkirk Little Ships that will make-up the largest single class of powered boats taking part in the procession of over 1000 boats barges and ships.

Arriving from all over Britain, they share a common link in being privately-owned but having assisted in the evacuation of 338,000 British & French troops from Dunkirk in 1940. The vessels currently gathering at Teddington also include those not involved in the Dunkirk operation.

The bunting-clad boats are currently mustered at Teddington Lock for the largest gathering of them since the Little Ships returned to Dunkirk in 2010. They have been maneuvering into the barge lock Little where they will stay overnight then set-off for Putney tomorrow.


These and some more photos can be found here.

The official schedule is for them to leave Teddington towards central London at between mid-morning (10am) and midday on Saturday 2nd June so if you want to see them before they leave, make it tonight or early in the morning!
[Update] Expected through Twickenham at 1-2pm Saturday.

The flotilla itself on Sunday will be over seven miles long and aside from being one of the largest ever gathering of ships on the Thames, could turn out to be the largest live public event ever held in London with 20,000 participants & crew and up to a million spectators lining the river route.

Bob Tough, son of Douglas Tough who famously personally mobilised 100 small boats for Operation Dynamo, died aged 85 just over a month ago. You can read his obituary here.

Bob’s firm built Royal Nore – the Queen’s official barge and Havengore which carried Winston Churchill’s coffin for his state funeral. Both of which will be taking part in the Thames Jubilee Pageant. 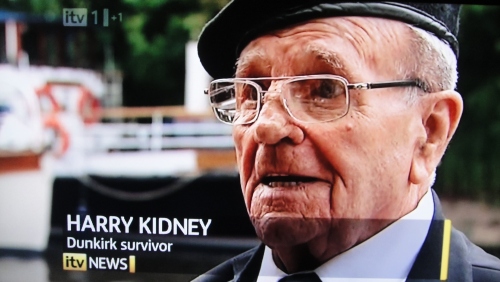 [Update 2/6/2012] Various media organisations were spotted around the boats and two WWII veterans that experienced Operation Dynamo first hand were interviewed by ITV on a little ship whilst moored at Teddington Lock. 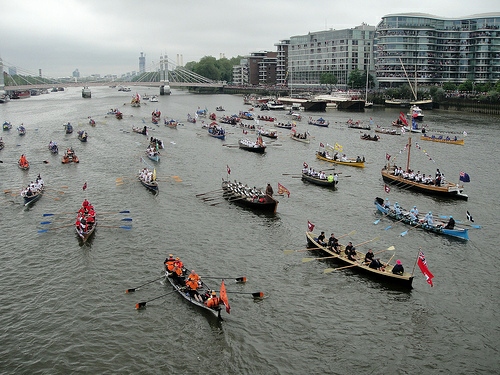 [Update 3/6/2012] Many residents of Richmond Borough won tickets to watch the River Pageant from a private viewing area on Battersea Bridge. Although somewhat windy, the weather remained mostly dry enough to enjoy the view of the pageant passing underneath. Some photos from this view can be found here.

Also thanks to Margaret Allen for solving the Mystery of a group of Italian-looking men wearing blue spotted at Teddington Station last week – they were staying at the Lensbury Hotel because they were rowing Gondoliers in the Pageant.

[Update 3/6/2012] If you’re hoping to catch the Dunkirk Little Ships on their way back, they are leaving Canary Wharf at 11pm on Tuesday and expected back through Richmond at 2:20pm and Teddington by 2:45pm.