Some ADSL broadband users in the area started to notice loss of service, along with out-of-action phone lines in general at the start of the week. Police soon confirmed after these reports that a cable theft incident had occured between Teddington and Hampton Wick.

BT own the phone/broadband cabling network so even if homes in the affected area use other providers for ADSL broadband and landline contracts they will potentially be affected by this issue. 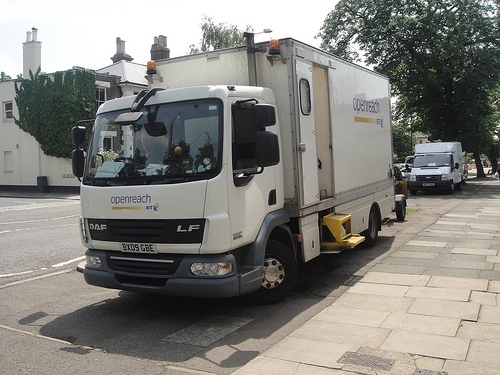 Status info: We’re really sorry but due to a cable theft in the Teddington area, some of our customers will be having trouble with their telephone line. We’re trying to fix the problem as quickly as we can.

There were 6 BT Openreach vans spotted in Kingston Lane and the official estimated time to resolve is listed as 22/08/12 14:00 but many residents have been told in person that it could be Friday 24th before it is fixed.

As well as new government initiatives to reduce cable & metal theft, BT are introducing new ‘burglar alarm’ technology designed to catch cable thieves in the act by directing police to the scene as it is being removed. BT estimate that cable theft costs the UK economy £770 million each year.

[Update 24/08/2012] More detailed information from police: the cable in question wasn’t stolen but instead cut and still needed repairing. After the counter-measures against railway cable theft there has been a shift more towards phone cables (as they are also less dangerous to remove). Criminals are also aware of the new BT anti-theft warning system so quite often (as in this case), they cut the cable then stay nearby to see if this triggers a response. If not, they will then attempt to remove the cable. This will be at least a two man job that requires climbing 12ft underground using manhole access and a vehicle to transport it.

Teddington Police team are recommending that residents stay aware of any road crews they see working around manholes even if they are wearing hi-vis vests. If anything looks suspicious (e.g. a van without any company name on or no visible ID), don’t approach them yourselves but make a note of the vehicle registration number and any description. You can call the non-emergency Police number 101 or 0208 247 5847 for the direct Teddington station number and pass on any details.