In May 2012, a local engaged couple in the midst of planning their wedding, uploaded a video to YouTube with one lofty aim – to get their idol Craig David to their big day.

Their version of Seven Days tells the couple’s story to the backdrop of some local sights including Bushy Park and The Teddington Arms and ends with an invite to the R&B star to their August wedding. The song lyrics even manage to rhyme words with “Oceana” – the club where the couple originally met.

The couple are huge fans of Craig, have followed his career closely, seen him live 25 times and wanted to see if they could complete their perfect wedding with an appearance and maybe even a performance from the man himself.

The video soon became viral and Craig from his home in LA spoke on Twitter of how much he enjoyed it, but it didn’t sound like he would answer their request. Not long after though he added that he felt strongly that he should attend and he would do everything in his power to be at the wedding. A phone call from his agent confirmed the appearance and the rest was history! He performed for an hour at the reception in Witchford, Cambs and chatted to guests and signed autographs. 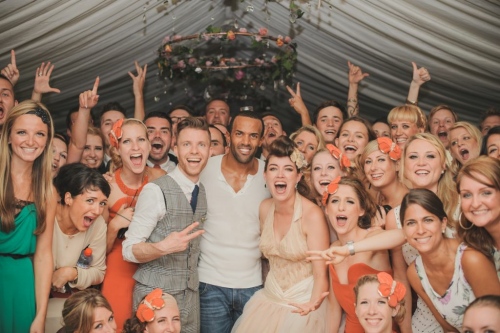 After the event he added: “Seeing them so happy having me attend & hearing me sing was as emotional for me as it was for them! … They told me it was a dream come true for them….. & for Me no money or material item could give me this much happiness & so much happiness for them at the same time! “. The story has seen huge press interested and was featured in many newspapers this week.