Plans for different aspects of the Nando’s near Travelodge have been granted permission so this restaurant chain will definitely be opening in Teddington. More external seating was added to the layout before plans were given the go-ahead.

Officially the opening date has been cited as February and more recently the manager of the Richmond branch who is organising recruitment and has mentioned that the plan is to open at the end of January.
[Update] Planned opening day is January 30th 2013.

It has been reported that Pinewood could quit Teddington within the next two years as part of a facilities re-assessment and lease review. Pinewood is looking to upgrade its TV offerings by concentrating investment at sites that are owned, Pinewood currently rent Teddington Studios from Haymarket Group. Obviously the loss of Pinewood recordings at Studios would affect trade in the town from the staff, visitors and audience that visit for recordings.

Plans have been submitted to create a Sainsburys Local store at 196 High Street where Calligaris furniture shop is currently located.

The rear extension is in poor condition and plans include a request to rebuild this as it exists now. 6 parking spaces would be available for the supermarket which would be “primarily to serve the local population who will access the store by foot/cycle” so wouldn’t be a ‘destination’ supermarket bringing more potential shoppers to the area.

The building currently has permission for A1 class retail use but the restriction on use of: “That the premises be used only for the sale of non food products… To safeguard the amenities of nearby occupiers and the area generally having regard to potential traffic generation of alternative retail uses. Proposed signage states that it could be open 7am-11pm daily. 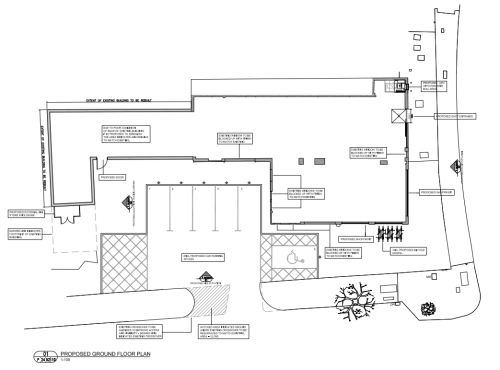 The shop left vacant after Teddington Carpet Centre moved to downsize their retail space has now been let – this will be a fund-raising shop for Shelter, the housing and homeless charity. Work is also nearing completion for a new sweet patisserie (Sidra Patisserie) on Church Road.

Queens Convenience Store on Stanley Road will soon offer groceries, newsagents, dry-cleaning and bargain booze. There’s good news for commuters, the disused WC at the station is to be refurbished, remodelled and re-opened to the public (next to the taxi office).

The revised plans for the demolition Queen Dowager pub and rebuilding of four residences (previously 5×4 bedroom houses, now 4×3) went to a planning committee meeting last week and is available to view online. It’s an interesting insight to view the presentations given by both sides and criteria used to discuss the issue with relation to planning regulations. On this occasion the previously refused plans were given the go-ahead by 5 votes to 4 with attached conditions for replanting vegetation and frosting first floor windows to reduce the overlook to neighbours.

[Update 15/01/2013] The Application decision due for the Sainsbury’s application was due to be 11th January 2013 but Sainsbury’s have slightly changed their plans – they have withdrawn the plans for illuminated signs but the rest of the application will still be considered.

@Teddington_Town @paulojohnson we’ve listened to feedback & withdrawn part of our proposal for signs, not the whole application #teddington