Richmond Council is currently undergoing a consultation into plans to improve safety at the mini roundabout that junctions Waldegrave Road and High Street.

This planned safety scheme is aimed to reduce accidents involving cyclists – official figures show that accidents here are well above the borough average with 16 collisions over a five-year period, 14 involving cyclists and 12 following the same manoeuvre – colliding with cars exiting Waldegrave Road. 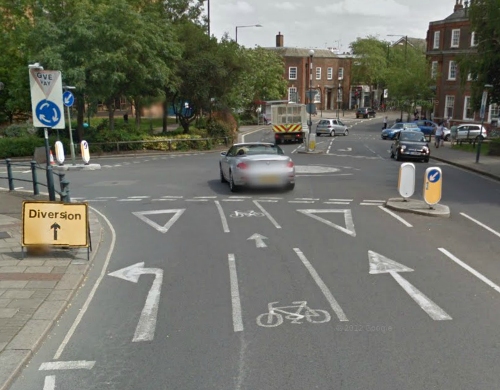 Studies have shown that cyclists approaching the roundabout from Broad Street direction are being masked by left-turning cars and vehicles may be mis-judging cyclist speed due to the downward gradient. The cycle lane is currently in between two car lanes, one for straight ahead and one for turning left into Waldegrave Road. Aside from alteration of traffic islands, increased kerb size and removing the pedestrian guard rail, the major change proposed is to reduce this car lane approach to just one. 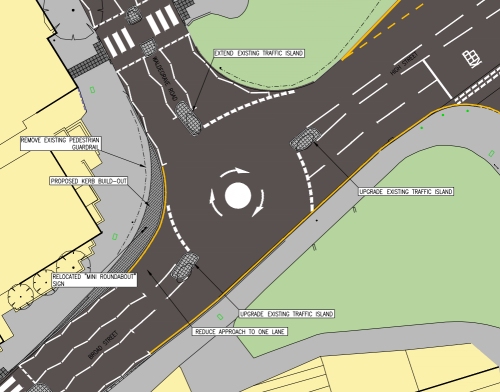 The Police, buses companies and independent safety auditor and Richmond Cycling Campaign are all in supportive of these changes. RCC are also proposing that the traffic island layout is further adjusted to avoid ‘pinch points’ and re-arrangement of kerb lines to increase deflection, also a more general review of cycle lanes to and from this roundabout.

Members of The Teddington Society believe these may be unnecessary and in fact create different dangers as cars and cyclists will be forced to share one lane going into the roundabout. The reduction in lanes would also create additional queueing during peak periods – both observations of how this functioned when it last had this layout before changing in 2002/3

You can comment on these proposals by emailing HighwaysAndTransport@richmond.gov.uk quoting ref 2293_CL_121112_LF. The deadline for comments is Friday 21st December and all comments received will be discussed with ward Councillors and be presented to the Cabinet Member for Highways and Street Scene who will decide whether to go ahead.