Sainsburys have amended their application for a new supermarket at the Calligaris site so the illuminated ‘totem pole’ sign will no longer form part of the plans. A new decision date will therefore be communicated by Richmond Council when known.

In the meantime an alcohol license (up to 11pm) has been requested for the site along with a request for opening hours of 00:00-24:00 from Sunday to Saturday. The original plans only hinted at the opening hours (7am-11pm) in drawings but now the store seems to be aiming to be open 24 hours on 6 days of the week. If you wish to comment on this license application you can do so by emailing licensing@richmond.gov.uk.

[Update] Contrary to rumours that Sainsbury’s have withdrawn their application, it is now on hold so that they can consult further. The local Safer Neighbourhood Police team have written to LBRUT to protest the alcohol license and late opening hours fearing this could again lead to groups drinking in Udney Hall Gardens.

RHP recently wrote to nearby residents of Queens Road and Little Queens Road about potential plans to build new homes in the area. One of the proposed schemes has now been submitted for Little Queens Road: the demolition of garages and the creation of three new households. RHP own and manage a number of garages in the borough and they would like to invest in these areas to provide a range of much needed affordable homes.

Representatives from The Teddington Society are questioning the accident figures and consultation process for the Waldegrave Road roundabout plans to change the approaches to this junction into single lanes. If you agree you can email Councillor David Porter, Chair of the Environment, Sustainability and Community Overview and Scrutiny Committee at cllr.dporter@richmond.gov.uk

Despite some objections, plans for a Halfords MOT Centre in Teddington Business Park (near the station) has been granted and a further application for signage has been submitted. A similar new illuminated sign has been requested for the side of Starbucks – the decision date for this application is the 18th of February. 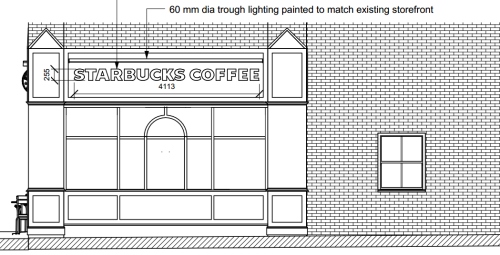 Plans have also been submitted to demolish the former diary, milk float depot and builder’s merchant yard. The existing buildings would be demolished and the site (currently 101-105 Waldegrave Road) revitalised into 36 new homes – a combination of houses and flats, all with basement parking included and a central courtyard. 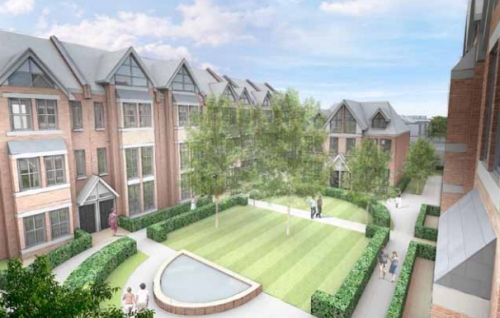 A view of the proposed courtyard. More detailed plans can be found here on the developer’s website www.waldegrave-road.co.uk.

Work to refurbish the Pheasantry Centre in Bushy Park started on Monday 11th Feb and will continue until the . [Update] Re-opening now scheduled for May 16th. Whilst this work to increase the facilities continues there will be two temporary kiosks to serve refreshments on site. Once complete there will also be a kiosk specifically for dog walkers who currently cannot enter the gardens and use the cafe with their dogs.

Teddington footbridge will be closing daily between 9:30am and 3:30pm Monday to Friday from Monday the 4th of March for approximately 4 weeks (until approx 28th March). The £80k works are necessary to install new lighting, more width-friendly and LED-lit handrail and carry out general repair works and maintenance including the replacing of some of the cross-beams underneath the bridge. 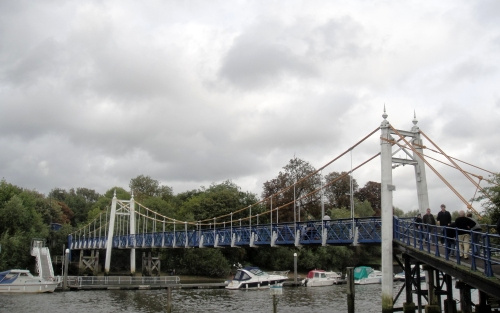 Councillors are warning that Government plans to allow changes to commercial buildings into homes without permission will damage economic growth in the borough. When the law comes into effect this spring, new residential developments will no longer need specific permission to do so or provide a percentage of affordable housing or make any community contribution as they currently do.

Councillor Stephen Knight said: “These proposals could be devastating for the economy of boroughs such as ours – wiping out most of the small office sector and, over time, putting larger offices under threat as leases come up for renewal. This is bad for our local economy and does little to tackle overcrowding and homelessness, with no requirement for any of the new flats to be affordable, nor for any contribution to be made to the cost of extra school places.”

[Update] The plans for new dwellings (5 x 3 bedroom houses, 3 smaller apts) on the Kingston Road petrol station site have been approved – you can find details of this development online here.