Many EE (Everything Everywhere) customers in the area have noticed increasing problems with their phone signal for several months now (particularly in recent weeks) and are none-the-wiser after calling the company to complain.

Different EE customer service representatives have given a variety of reasons that may be to blame – from the weather, phones ‘slipping off the network’, to a broken transmitter and faulty SIM cards that need to be re-ordered. It’s clear though that when you map all the issues locally, there aren’t any particular black-spots where the signal may be bad, it’s a wide-spread issue for the area. 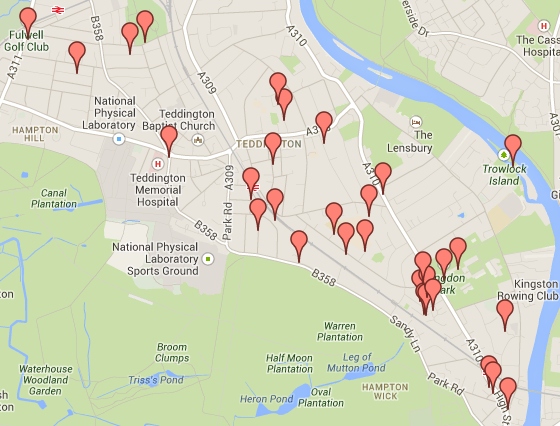 One customer has been offered a 20% discount off the rest of their contract and another heard that a faulty transmitter on Park House (Travelodge building) maybe the cause but access can’t be granted to fix this.

Some frustrated EE users particularly those that need to be on call for their jobs and are now looking for alternative providers, customers also have reported texts taking several hours to be received and in one extreme case, a text sent from Teddington took 19 days to arrive!

[Update 28/01/2014] Official word from EE – advice from customer services hasn’t been consistent because the reason for the disruption hasn’t been clear until now. An unidentified signal repeater in the area is believed to have been causing the issue – these boost signals in some spectrum ranges but can interfere with signals from other masts. They are sometimes sold online to consumers as a solution to poor mobile signals, but often users do not realise they aren’t licensed to use these and could face a fine or imprisonment.

Identifying, tracing and removing the interference is a difficult task and includes the involvement of Ofcom. EE would like to apologise for the issue that is outside of their control, and assure customers that there is a dedicated team trying to fix this as soon as possible.

[Update 07/02/2014] Update from EE: the illegal repeater was located and shut down by OFCOM, steps are being made to now seize this. The interference was checked & has stopped and the central Teddington mast performance is being monitored closely by the technical teams to check it’s working fully.