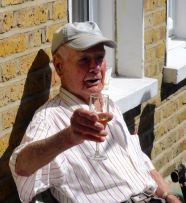 Everyone made the most of the fine weather, enjoying a barbecue, a singalong to Richard’s favourite Frank Sinatra tunes, plus a ‘This is Your Life’ segment during which he was presented with gifts from family, friends and neighbours, as well as his former employer British Airways. Richard, a lifelong Brentford FC supporter, was also presented with a book charting the history of the Bees. There was plenty of fun for the children too, with organised games and a bubble machine to enhance the party atmosphere. And once darkness fell, an outdoor slide show captured historical scenes of Teddington.

King George V was on the throne when Richard was born on May 10, 1916. The Great War was at its height, with the Battles of Jutland and the Somme about to commence and the Government widening conscription to include married men. Sir Ernest Shackleton was leading his famous 920-mile rescue voyage from Elephant Island to South Georgia in the South Atlantic, while the Easter Rising in Ireland had just been suppressed by the British Army.

Richard was born at 44 Gomer Gardens, Teddington, one of two properties in the street occupied by his family. The other, 17 Gomer Gardens, is a stone’s throw away and where Richard has lived almost all his adult life. His father worked at Teddington Lock with the barges and Richard and he and his brothers and sisters attended Christ Church School.

His childhood memories of growing up in Teddington evoke a bygone era: standing on the footbridge at Teddington Station as trains passed underneath so that he would be engulfed in steam; cycling along Chestnut Avenue in Bushy Park and trying to hitch a free ride from the horsedrawn carriages which were still commonplace at the time.

Richard’s first job was as an usher at Teddington’s Savoy Cinema, which was located on the corner of the High Street and Elmfield Avenue, where Harlequin House now stands. A keen darts player, he was often to be found in the Kings Arms (now the Clock House), which is where he met his wife Elsie. Richard was told by the barman that a young lady would like to speak to him, to which his response was “Why, what have I done!?”

After that unpromising start, their courtship began with a trip to Ham Pond. Elsie lived at 60 King Edwards Grove and Richard was a frequent visitor; he remembers the bombs and shrapnel falling in the area as the Luftwaffe targeted Turks Boatyard, from where many of the boats involved in the Dunkirk evacuations set sail. Richard and Elsie married in 1941.

During World War II, Richard was seconded to a government facility in Crayford specialising in the development of ground penetrating radar. This technology was of vital importance to the war effort and Richard is justifiably proud of his involvement. The project was so secret that those involved were only party to information relevant to their particular role, to ensure security was maintained.

Richard talks of cycling home from Crayford to check that all was well at Gomer Gardens. He had reinforced the understairs cupboard so that Elsie and her sister, who was also living at the house at that time, could take shelter during air raids. Richard and his friends often used to go to the Railway Hotel to meet and chat with the US troops stationed in nearby Bushy Park.

After the war, BOAC were looking to recruit specialists from the armed forces and Richard showed a commendation for his war work which said he was ‘No. 1’. He was promptly hired and continued to work for the company until his retirement in 1981.

Elsie and Richard became parents to Ron and John and the family subsequently grew so that Richard now has two grandchildren and four great-grandchildren. The couple were stalwarts of the Gomer Gardens community and former neighbours recall their kindness, with a warm welcome, help and advice always available.

Richard’s status as a BA employee allowed the couple to enjoy regular travel and they ventured overseas on many occasions, travelling as far afield as Bulgaria, Malta and Texas, the latter to visit former neighbours. After Elsie passed away in 1999 Richard maintained his special place in the community. He devoted much of his retirement to gardening, growing vegetables both in his own garden and at the Royal Paddocks Allotments in Hampton Wick, where he was a frequent prize winner. 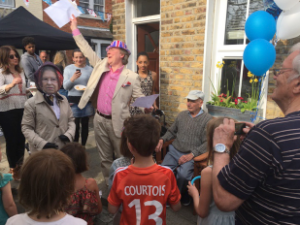 Richard has seen many changes in Teddington over the years but is grateful to have lived his life in Gomer Gardens, which he says is ‘the best’. “Neighbours have come and gone over the years but the people have always been great: really friendly and I look forward to the get-togethers.” As to the secrets of a long life, he says it’s simple: “Do what comes naturally and keep on keeping on.

Gomer Gardens occupies part of the former estate belonging to author R D Blackmore, whose most famous work was Lorna Doone. Blackmore purchased the land around 1858 and completed the building of his home, Gomer House, in 1860, living there until his death in 1900.

The road is tucked away between Teddington High Street and station – and for as long as anyone can remember, the sense of community has been exceptional. Last Saturday’s party continued a tradition of community events stretching back to the first recorded street party in 1904 to celebrate Empire Day. National occasions have been marked ever since and more recently, residents have instigated an annual party around the time of Richard’s birthday.