Commuters on a service from Teddington last week were left trying to explain to their bosses that a swan had delayed them getting into work.

Friday the 13th left the public second-guessing what might happen during the day but no one could have accounted for a swan waddling down the track.

The swan was on the track for around two miles as the train following it was forced to travel at 3.2kph. 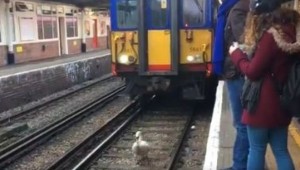 Footage taken by a member of the public shows the swan walking just a metre in front of the train, as it gradually pulls into Kingston Upon Thames station.

According to Metro.co.uk, Billingshurst said, “The train was rolling into the station at two miles per hour. People commuting to work were getting frustrated and one man was so annoyed he got on the tracks waving his laptop in one hand and tried to manhandle the bird. It was one of the most bizarre things I have ever seen.”

There was a happy ending as the swan was released safely and normal service resumed on the tracks. 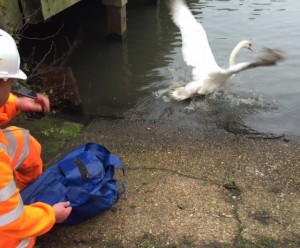