The proposed ward name changes to Hampton Wick, Fullwell and Hampton Hill will not take place because the public consultation received less than 100 replies – making it clear that there isn’t enough support for this action. 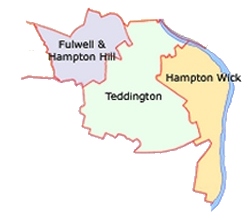 Letters to community groups, notices on Richmond Councils website and notice boards to request responses – most of which were split fairly evenly between for and against.

At a meeting to decide the outcome of the proposals, 23 councillors voted for, 16 abstained and 4 voted in favour of the motion. One of the reasons given to not make the changes was that ward names are easier to remember, distinguish between and administrate when they are shorter. The proposals would have meant the already lengthy names increasing even more.

Another curious reason was that a large amount of money would have been needed to change the ward boundary names on road signs – whereas it’s actually district boundaries that appear on some road signs (you can see ‘Twickenham’ whited out on some signs replaced with ‘Richmond’).

As if to prove how confusing some names remain, a Richmond and Twickenham Times article includes an error mentioning “South Twickenham” instead of “South Teddington”:“However 54 per cent of people voted for the Hampton Wick ward to have South Twickenham added to its name.”