Teddington train commuters can finally now use Oyster cards for their journeys (although there were some teething problems) but now it has been revealed that currently there are no plans to be able to top up their Oyster cards at South West Train stations.

All train companies operating into London now accept Oyster cards as of January and the train operating association has said that most of the 237 additional stations would soon also allow top-ups for Oyster cards. South West Trains however have said that this service isn’t part of its franchise agreement – which translates into unneccessary journeys to nearby newsagents and other shops for top-ups.

At Teddington Station a sign points out the nearest shops equipped to provide top-ups – the nearest is a 10 minute round trip to complete: 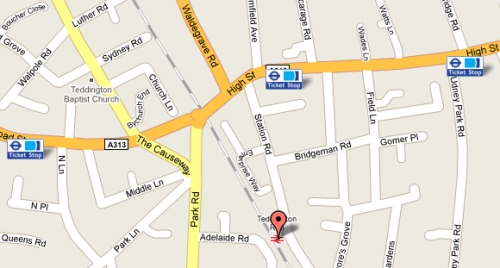 A spokesman from Transport for London said: “While Oyster pay-as-you-go cannot be topped up at stations managed by South West Trains, with the exception of Wimbledon and Richmond, passengers can top up at about 350 local shops in Richmond, Merton, Sutton and Kingston.

“We will continue to encourage SWT to provide Oyster top-up facilities for their customers at all their greater London stations.”

South West Trains has come under fire in recent months for announcing job losses and reduced opening hours for ticket offices. In rebuking claims that this will lead to a poorer service for commuters, SWT has explained how this re-focus will instead put more emphasis on automated methods of purchasing tickets such as online, Oyster and automated ticket vending machines.

You can find the nearest location to top-up from anywhere in London using this TFL map.