Lots of correspondence has been exchanged since local residents started to voice their concerns over the new fences at Teddington and the protests are showing no signs of letting up.

The Teddington Society has officially written to South West Trains and Network Rail asking for full clarification of the circumstances and reasoning for the new fences that have upset residents. The issue seems to have united opposition throughout the Teddington Society’s 1000+ members and opposition hasn’t felt this strong about any local issue since the Police custody suite proposals back in 2007.

One response from Network Rail: “The fence running along the railway around Teddington station needed replacing. As the old blue railing-style fencing no longer complies with modern standards, we replaced it with one of our standard, medium-security chainlink fences which included barbed wire at the top to act as a deterrent to people attempting to climb over it. Following concerns raised by some local people, we have offered to meet with Richmond Council to discuss options for replacing the barbed wire element of the fence. It is important we maintain a secure boundary along the railway to deter trespass on the railway and vandalism, which could put lives at risk.” 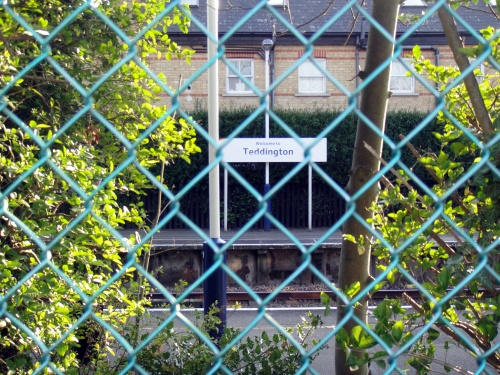 The Society’s view is that the historic railings should be put back in place (or another compliant modern alternative) because most if not all of the justifications given by Network Rail for the replacement of the fence don’t seem to tally with specifics of the station – specifically:

Opponents to the fences have replied that Network Rail have provided no evidence of any of the above – any graffiti that has appeared around the station is on the opposite side of the tracks under the road bridge or at the power substation which seems most in need of any new fences (and also doesn’t face the front of houses). One glaringly obvious factor in this discussion is that the station remains open 24 hours a day so any fences won’t actually stop anyone entering the concourse and adjoining land. 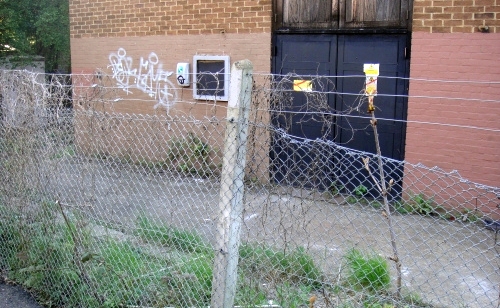 Electricity sub-station on the Richmond/Shepperton-bound platform

An on-site meeting to include Network Rail and Vince Cable may take place soon with a view to clarifying the fencing policy which the Teddington Society believe should give special treatment to Victorian Railway Stations in built-up areas facing houses such as Teddington Station.