A huge power cut left large areas of West London without power today as England fans cheered on their team in the final group game.

The timing couldn’t really be worse for sports fans – literally just before an all-important goal that helped England surge through to the next stage just as Teddington suffered an altogether different kind of surge and was plunged into the dark ages. Nearby towns such as Twickenham, Kew, Richmond, Strawberry Hill, Whitton were all hit simultaneously and fans had to get inventive to keep up with the score – using radios, phones or calling friends for updates.

Teddington itself only had a short outage but areas such as Twickenham suffered for much longer and subsequently police had to be called to some High Street pubs to calm angry World Cup fans.

Trains seem to be unaffected but some street-lights were not working – causing traffic snarl-ups. More importantly water pumping-stations were also knocked out of action leading to water supplies being unavailable into well into the evening (until 8pm for most).

Local shops such as Tescos sold out of bottled water pretty quickly as news of the water supply problems spread. 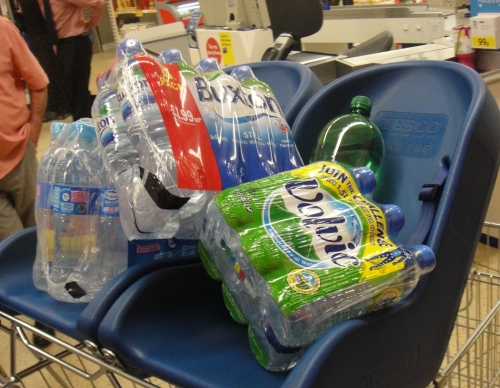 The latest information from Thames Water site at time of press:
Customers in postcode areas TW, KT, SW and W may be without water following a power cut in the area, which is affecting our pumping station.
We’re working to fix the problem and will restore supplies as quickly as possible.
We are very sorry for any inconvenience.
Updated: Wed 23 Jun – 6:47pm

[Update] some official statements have been released – EDF Energy have said that the outage was down to a fault on a high-voltage cable network – cutting supplies to TW1-TW12 postcode area for up to an hour. Electricity was re-supplied to water works by 6:45pm and all properties had their water supply back to normal by midnight. An estimated 500,000 homes were left without water for at least several hours during this period.

Many Teddington businesses had to close early including Marks & Spencers and Pizza Express.