Plans to turn Park House into a 113 room hotel once current office tenants move out at the end of this year have been submitted to Richmond Council.

The recession has hit commercial landlords specialising in office space hard and Teddington has not escaped this general trend – different uses for empty offices are increasingly being explored. Budget hotel chain Travelodge are seeking to secure a long-term 25 year commitment which is much greater than the normal short-term office space leases.

As for the need for a large hotel in Teddington, the planning application states that demand regularly outstrips supply in the area – aside from some bed & breakfasts, more upmarket Park Hotel and the Lensbury are the only notable hotels in Teddington itself. General tourism, being with short distance from Heathrow and subsequent easy access to London, Hampton Court etc would mean that rooms would be regularly filled, as well as other local draws such as Teddington Studios (audiences regularly travel from far-afield) and there is also a steady stream of visitors to the NPL who already has corporate rates in-place with other nearby Travelodges. 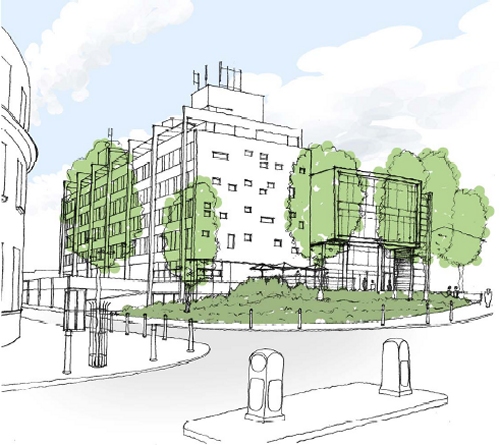 The existing building conversion will happen almost entirely internally only so will hopefully have little impact on the look of this prominent building – a separate application will be submitted for the advertisement signage. It will be converted into a 113 bedroom hotel and the smaller ‘studio’ building next door will be demolished and rebuilt as an adjoining four-storey annex which will contain an on-site bar/cafe – usable by hotel guests only.

The building sits within the CPZ and although the number of self-contained car-parking is well within the recommended ratio vs room numbers, there is a risk that guests will simply park on surrounding roads outside of the CPZ-restricted hours and add extra pressure on already-crowded roads.

Currently 140 office workers occupy the building (using three of the five available floors) – as a hotel, about 100 employees will work here and an estimated 150 guests per night will stay, benefiting the local economy alongside local suppliers.

Travelodge’s own survey shows that private bar/cafe’s are only used by a minority of guests – almost three-quarters prefer to eat at local cafes, pubs and restaurants instead. Guests on average add £35 every day to the local economy and the total economic benefit to the neighbourhood could be between £0.6 and £1.2 million each year.

It should be noted that this planning application is independent of plans for a similar project in the centre of Twickenham also involving Travelodge, who have expressed their intentions to secure hotels at both of these locations.

Given that the site is within a mixed-use area that includes residential properties a public consultation to these proposals is to be urged. The full detailed plans can be found here.

[Update] After meeting with the building owners and Travelodge representatives, “Teddington Society will not oppose Travelodge for the town”. Most of the objections raised against the development seem to be concentrating on parking/traffic issues. If agreed, work will start on this development in March 2011 and is expected to take 12-15 months.

0 thoughts on “Travelodge plans for the heart of Teddington”