Teddington has finally joined the rest of the country as residents woke up today to a proper covering of snow – we were beginning to think that it was deliberately trying to avoid us!

Local schools are open but some are keeping students inside during breaks – so they will be bursting to experience the snow at home time this afternoon. 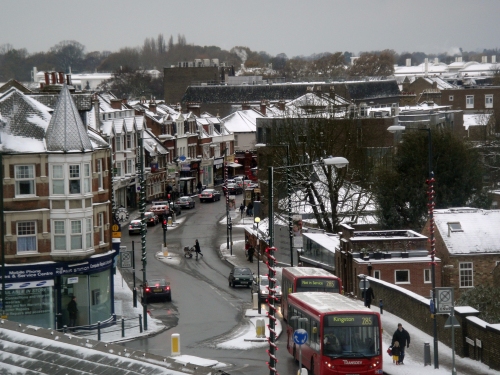 The London Borough of Richmond upon Thames have a statutory duty to ensure main roads and important public buildings (schools, hospitals, care homes etc) are accessible and not endangered by snow or ice using its five gritting vehicles. Currently all main roads in the borough are open – they were gritted three times over night using 36 tonnes of grit! The gritting teams are continuing this process throughout today.

There is an official list of roads which are gritted during these wintry weather conditions. Note however that footways and pavements aren’t officially on the borough’s gritting policy unless freezing conditions persists and this will firstly apply to areas outside priority buildings such as stations, schools etc. 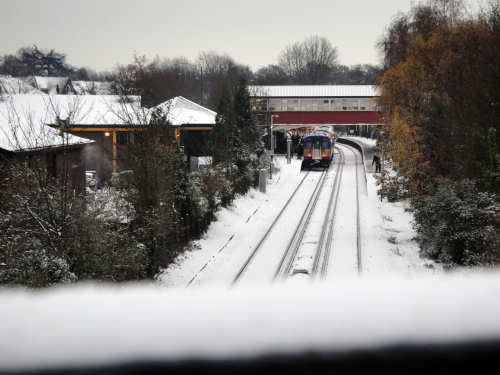 Transport-wise, the general advice is to take care – some pavements are slippery, main roads seem to be OK but smaller side roads are now covered in slushy snow and ice, or at least will turn into ice later.

The trains seem to be suffering the worse – South West Trains have announced a special reduced train service across its network. Passengers are advised to check for updates before they travel – there is significant disruption to services and currently some routes are either cancelled or delayed up to 45 minutes. Even aside from the problems with the tracks themselves, on some services moisture on train doors has been freezing at station stops so train guards are having to scrape ice off doors at each station.

Earlier this morning some trains were running fast from Kingston to Waterloo and Shepperton & Richmond trains were cancelled completely. Also check the online live departure boards for updates before you travel.

[Update] South West Trains will be operating a special timetable for Friday 3rd December for lines that will be running to ensure “the most robust level of service for passengers tomorrow“. The Shepperton or Hampton Court branches will not be operating tomorrow.

Check the website and live departure boards before you leave in the morning.