Coward’s talent shone brightly from an early age as he became know for his many abilities throughout a busy life that included the roles of playwright, composer, award-winning actor, singer and also for his wit and flamboyance. His dandy attitude towards life matched his reputation as a fashion icon and he has been named by many as the benchmark of British style and substance – perhaps even inventing the very notion of the ‘celebrity’ and leaving him with the honourable nickname ‘The Master’.

After attending dance school, he made his stage debut at an early age and throughout his teenage years honed his talent and love for the stage with the legendary Sir Charles Hawtrey. Through this connection he was also introduced to the high society which provided the backdrop to most of his plays that were to follow.

The drug and sexuality infused content of the first of these, The Vortex lauded him with praise and commercial reward, turning him into an overnight success in Britain and the US. This is amongst several Coward plays that are still shown to this day – Will Young took to the stage recently to play the role of Nicky Lancaster. 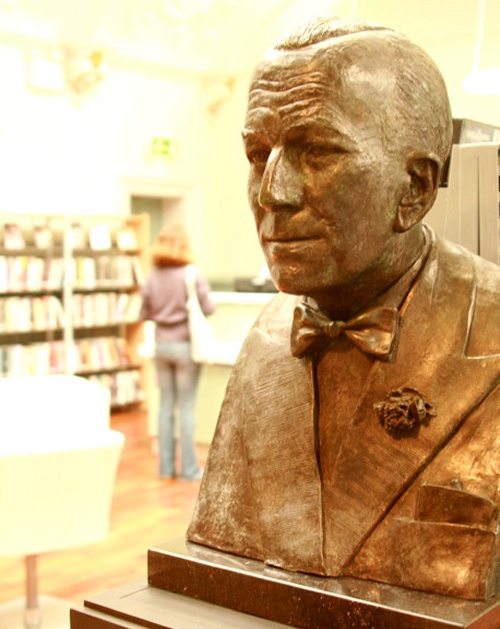 With the outbreak of World War II he proved that his dedication was not limited to the arts – not content with conquering the world of theatre, turning his hand to operettas and delighting society crowds wherever he went, he also worked with MI5 and also created inspirational films to rally the troops and folks back home.

After working in the British propaganda office in Paris and spying in various countries in Europe, he was tasked to use his celebrity to influence the American public and political opinion in favour of helping Britain’s war efforts – a job which he was proud to do but brought him frustration because he couldn’t reveal the true nature of his task to the public. He was a whisker away from receiving a knighthood for his efforts but Winston Churchill personally blocked this – with Coward’s ‘flamboyant lifestyle’ in mind.

Today he is immortalised in an attractive bust which greets guests as they enter Teddington Library, Waldegrave Road – the road in which he was also born and with a blue plaque visible at number 131.

One of his famous quotes: “Never mind, dear, we’re all made the same, though some more than others.”